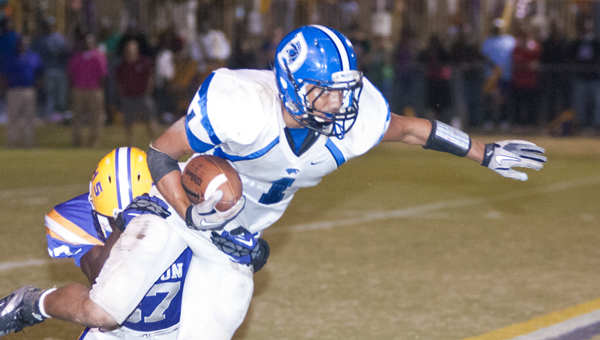 Demetrius Kemp returns a punt against Jackson on Friday night in Demopolis' 34-7 loss to the Aggies.

The Demopolis Tigers (8-1, 6-1) showed up in Jackson with high hopes, but they were not able to make the plays necessary to come away victorious.

Demopolis’ defense stood strong early in the game, but big plays from Jackson’s passing game put the Tigers in a hole they could not dig out of.

A shanked punt by Demopolis with 7:55 to go in the first quarter led to Jackson’s first score, a 38-yard TD pass on a 4th and 4 play. A missed extra point made the score 6-0 Aggies.

In the second quarter, Jackson intercepted a Tucker Jones pass with 9:15 on the clock at the Jackson 3 yard line. Two plays later, after a 43-yard pass and a 54-yard pass, the Aggies were in the endzone again. After converting the two-point conversion, it was 14-0.

Another 3-and-out gave Jackson good field position and with 3:31 to go in the half, scored on a 48-yard pass. This made it 21-0 Jackson, and that score held until halftime.

By the half, Jackson had outgained Demopolis 272 yards to 79 yards.

Demopolis was able to get on the board with just under 3 minutes to play in the game on a 6-yard Jones TD run, making the score 34-7.

Head coach Tom Causey said nothing about his team has changed and that they will find out who they are next week.

“We didn’t make the plays we needed to,” he said, “and they did. We had opportunities to score, but we didn’t make it happen.”

Roderick Davis led the way on offense with 14 carries for 48 yards, and Demetrius Kemp led the defense with 5 solo tackles and 3 assists. Kessy Bell had 3 solo tackles 2 assists and 1 interception.

He added that they have to prepare for a good Hillcrest team next week, then Sylacauga in the first round of the playoffs.