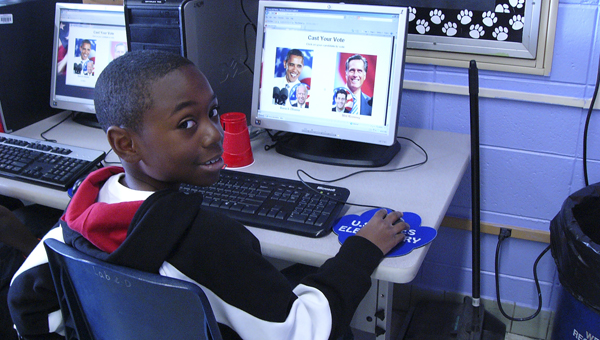 U.S. Jones third grader Amarion Booker casts his vote for president in a mock election held Tuesday at the school. It was part of a nationwide effort to teach students the importance of voting.

Next Tuesday, those of voting age will go out to the polls and elect America’s next president.

However, this Tuesday, America’s future rest in the hands of U.S. Jones students participating in the nationwide mock presidential election.

Silence fell over classrooms throughout the school as the results were announced with Mitt Romney collecting 223 votes and Barack Obama 259 votes.

U.S. Jones technology teachers Amelia Mackey and Penny Stanford have worked over the past few days to teach the students about the election and the election process.

“We participated in this the last four years and the students actually accurately chose who was going to be president,” Mackey said.

The school participates as a part of a nationwide effort to encourage students in the voting process. Students from Demopolis, across the state and nationwide participate in the mock election.

However, some northeastern schools that have been affected by Hurricane Sandy were unable to participate on the mock election day. The nationwide results are delayed and will be televised in the classrooms on Friday.

Several students participating were very excited to get a chance to vote at such a young age.

“I enjoyed the chance to vote because really, you can’t vote until you are 18,” he said. “When I tell my parents I got to vote today, they will be surprised.” 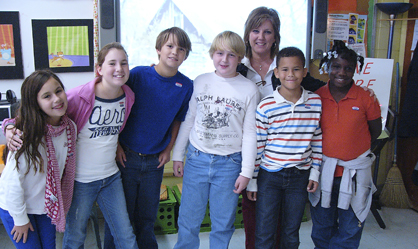 Students at U.S. Jones participated in a mock election on Tuesday. Some students are shown who participated in the voting. Shown are Tori Horne, Savannah Williams, Aidan Busby, Webb Miller, Tyree Tripp and Jadah Ash with their technology teacher Amelia Mackey.

Another student thought of the soldiers protecting America’s freedoms as she participated in voting.

“The soldiers fight for our rights, so it is important to vote to honor them,” Tori Horne, a fourth grader, said.

Mackey said it is their hopes that voting today excites the kids and in turn excites the parents to get out and vote.

“We hope this is the beginning process for the students for voting,” she said. “Hopefully they will take this experience and keep it up when they get 18 and start voting.”