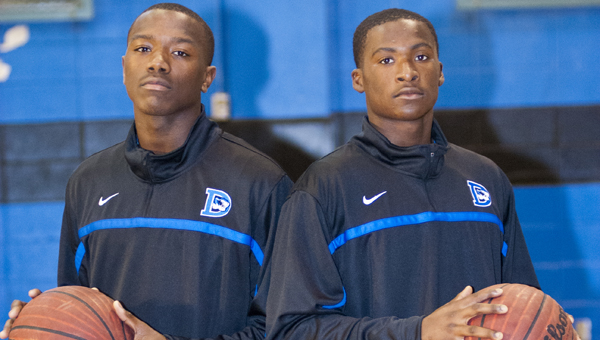 Cortez Lewis and Roderick Davis are the two returning starters for the Tigers in 2012.

The Demopolis High boys basketball team will tip off their season on Tuesday, Nov. 27 at Bibb County.

Head coach Rodney Jackson is entering his second season as head coach of the Tigers, and feels like his team is in a better position this year than they were last season.

He is returning two starters in Roderick Davis and Cortez Lewis at the shooting guard and power forward positions, respectively. At point guard, Kiante’ Jeffries and Tommy Wilson will battle for the starting spot. Tyler Perkins and Demetrius Kemp will play at the power forward and center positions. Demopolis newcomer Kevin Isaac, who transferred from Warrior Academy, will likely start at small forward.

Of the nine players on the team, seven are on the football team. Jackson does not believe he needs a roster of 15 or 16 players to have success.

During the summer, the team played 23 games together, and went 14-9. Jackson said they played against several good Class 6A teams, and he was pleased with how his team performed and fought in those games.

“They worked hard and never complained,” he said. “This is a team effort group and I am very excited about them. Last year, the team fought hard, but we couldn’t get over the hump,” Jackson said. “Over the summer, we fell into big holes early in a couple of games, but we battled back to win or make it close.”

The other teams that DHS will be facing in the area are Selma, Greenville and Sumter Central. Jackson said Selma will likely be the team to beat, but all of them have good teams.

The players on this year’s team aren’t as big as some that they will face, according to Jackson, but he said their physicality and athleticism will balance out not having that size.

“I hope our speed and athleticism will balance out the lack of size,” he said. “We play physical basketball and teams will have to come to play against us.”

Jackson said their goal is to double their region win total from last season, which was two. He feels like this will be attainable with the team he will have on the court.

Below is the 2012 Demopolis Tigers schedule: