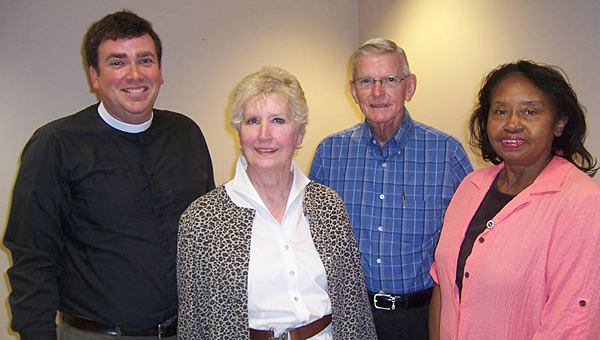 Shown are J.D. Barnes, Rebecca Culpepper, Buddy Jones and Hester Brown, all who earned service pins from the hospital auxiliary during its October meeting.

The Bryan W. Whitfield Memorial Hospital Auxiliary recognized four of the organization’s members with awards for hours of service during its October meeting.

Hester Brown, a member of the Auxiliary since Aug. 11, 2012, received a pin for 150 hours of service. She helped chair the October Blood Drive and plans to work with the event again next year.

A 500 hour bar went to J. D. Barnes who joined the group on March 11, 2010. He quickly heeded the call to leadership within the group when he was named secretary last year and is serving as treasurer this year. He received the President’s Volunteer Service Bronze Award in both 2010 and 2011.

Peggy Dunklin, a member since April 10, 2008, received a 1,000 hour bar during the meeting. Since joining the group, she has worked on many different committees and can be found helping customers in the gift shop each week. She received the President’s Volunteer Service Bronze Award in 2008, 2010 and 2011. She received the Silver Award in 2009.

Rebecca Culpepper began her second year as president of the Auxiliary in October by receiving a 1,500 hour bar. The organization skills of this retired school teacher have helped her lead the group as president in 2011 and now in 2012, in addition to serving as vice president in 2009 and 2010. Since joining the organization on April 12, 2007, she has worked on various committees, logging enough hours to receive the Presidents Volunteer Service Bronze Award in 2007 and 2009, and the Silver Award in 2008, 2010 and 2011.

A 2,000 hour bar was presented to Buddy Jones who joined the group back on March 9, 2006. Jones, the first male to lead the organization, served as president in 2009 and 2010. He was vice president in 2008. He received the President’s Volunteer Service Bronze award the first year he joined and has received the Silver Award every year since. He was also chosen as the organization’s Volunteer of the Year in 2010.