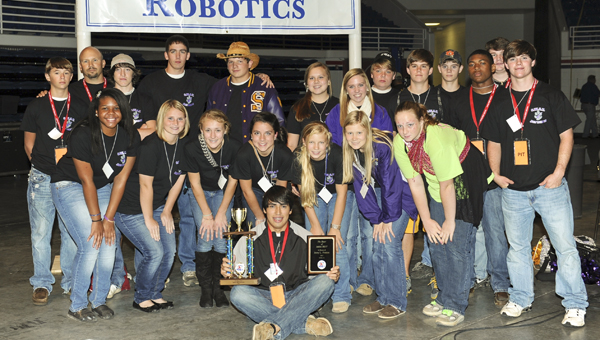 Shown above are the Sweet Water High School robotics team.

The Sweet Water High School Robotics Team finished second overall at a competition this week at the University of South Alabama.

The school will now go on to compete against 50 others at the Eastern Regionals, which will be Dec. 1-2 in Auburn.

The robotics team, called also S.W.A.T (Sweet Water Advanced Technology), also won fourth in the BEST award and won the Heart of Best award. In Mobile, there were about 35 teams that competed.

“The team is given a box of things to make a robot and have six weeks to build it,” Kevin Byrd, robotics team advisor, said.

After finishing the robot, the team goes to competition, where they present themselves as a company that built it. They also have to put forth a business proposal.

“The students really benefit from the experience because they get the chance to learn to work together as a team,” Byrd said.

Sweet Water will compete in robot, notebook, video, website and other categories when they advance to Auburn. The best teams east of the Mississippi will competed there.

“We have about five weeks, which sounds like a long time, but it’s really not,” he said.

Sweet Water is no stranger to winning at the USA competition. This is the team’s third year bringing home awards from that contest.

“It is a great experience for students in our rural setting to compete with students who they may be in college classrooms with,” he said. “It opens doors for them with business contacts and new things in technology.”

There are about 22 students on the team and they divide into teams to make their company work ranging from working on the business plan to working on the robot.