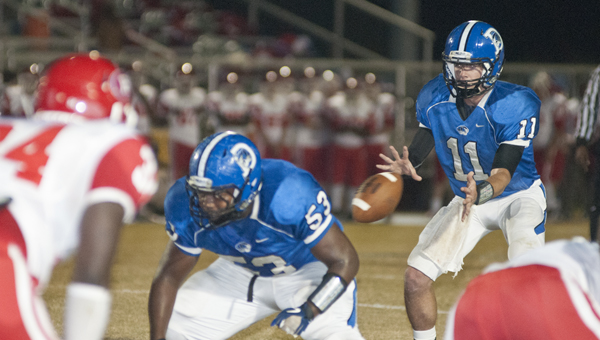 The Tigers offense struggled all night, especially on the ground. The offensive unit was responsible for one of the two Tiger touchdowns. Demetrius Kemp scored the other on a pick six late in the first half. 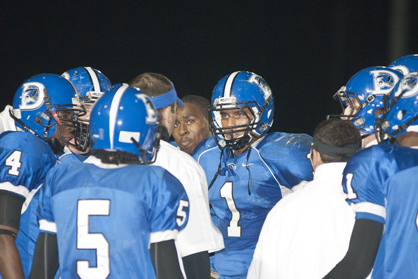 Demetrius Kemp and other Tiger players huddle during a timeout.

On the next drive, Hillcrest took the ball down the field to Demopolis’ 12-yard line, but a 96-yard pick six by Kemp put the Tigers ahead 13-7 after a missed extra point.

In the second half, Hillcrest was able to dominate the line of scrimmage and keep Demopolis out of the endzone.

With 5:59 on the clock in the third quarter, Joshua Mayhand caught a 23-yard TD pass from Riley Nix.

Then after a 3-and-out, Hillcrest was able to put the ball in the endzone again; this time on a 25-yard run by Torrian Riley.

Tom Causey said after the game that Hillcrest made plays and Demopolis did not.

“We just got beat,” he said. “They made the plays they needed to and we didn’t. They are a dang good team and they did a good job tonight.” 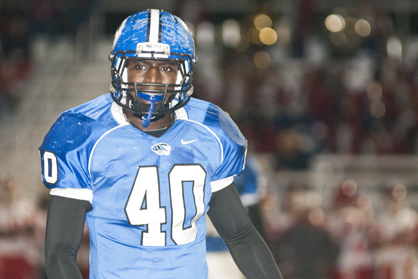 Causey added that he felt his defense played well enough to win, but they just could not get it done offensively.

“We have to get better at everything we do for next week,” he said. “We’ll learn from this game and come back next week.”

The Tigers will host Sylacauga next week in the first round of the playoffs. 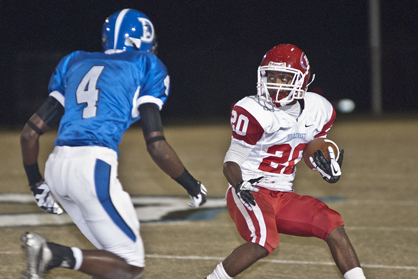 Bobby Taylor lines himself up to make a tackle against Hillcrest on Thursday night.