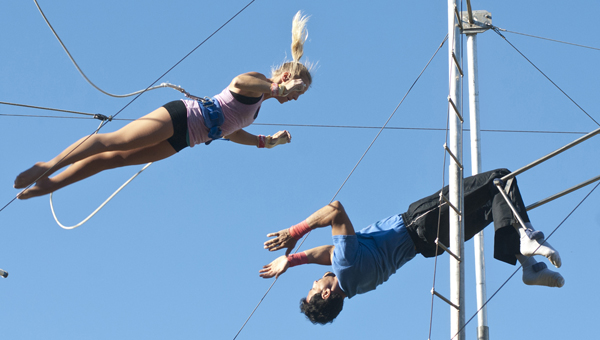 At the age of six, Alex Cortes began to fly.

Alex and his older brother, Robinson, are originally from Columbia, South American, and are fourth-generation trapeze artists.

The brothers, along with other performers from across the globe, make up The Flying Cortes, which now call Sarasota, Fla. home.

Though it is more likely to see them under the lights of Ringling Brothers and Barnum and Bailey, the group has recently began practicing on the property of Warren Bacon, a family friend in Gallion.

“They were coming from doing the fair in Montgomery headed to Kansas City so it just made more sense for them to come here (than Florida),” he said. 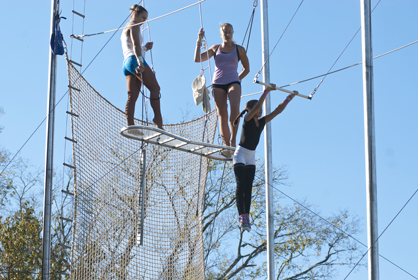 Rachel Hutinger and Dayna Thompson are shown standing on the platform and Ysabella Cortes is shown swinging on the bar.

Bacon sits and watches the group practice during the afternoon. However, he used to be on the opposite end of the spectator seat as he was a flyer years ago.

“I left graduate school to join the circus,” he said with a smile. “I found I was better at the circus, than I was at research.”

Warren met the Cortes family in the late 70s when he was performing and remembers Alex and Robinson as children.

Bacon said the flying trapeze is a sport in its athleticism, but also art.

“If its not something you want, no one can make you be good at it,” he said.

For Alex, being a trapeze artist was something he always wanted to do. He began flying at the age of 6 and his brother began at age 9.

Now Alex is 35 and his brother is 43, and they both have performed with circuses all over the United States. 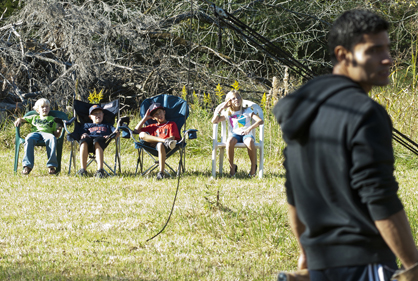 A group of kids watch The Flying Cortes train on Thursday. Out of focus in the foreground is Alex Cortes.

On a beautiful fall afternoon, small children gathered to gaze at the artists as they practice their tricks.

The Cortes continued their family legacy of flying trapeze and have since, granted several other trapeze artists a chance to go on the road and do performances.

Celina Machado of Brazil comes to the group after meeting them when they performed with “The Big Apple” circus in New York. Before, she was teaching at a trapeze school in Seattle, Wash.

“I saw these guys and really liked their style,” she said. “I also really love the family thing, not only are they a family, but they really treat us like family as well.”

A typical training day for the group consists of about 2-3 hours of practice while Alex and Robinson alternate coaching the others from the ground.

“It feels good to help others learn, though it is difficult at times, but it helps because they are all eager to learn,” he said. “It’s a great feeling, kind of like what a school teacher would feel.” 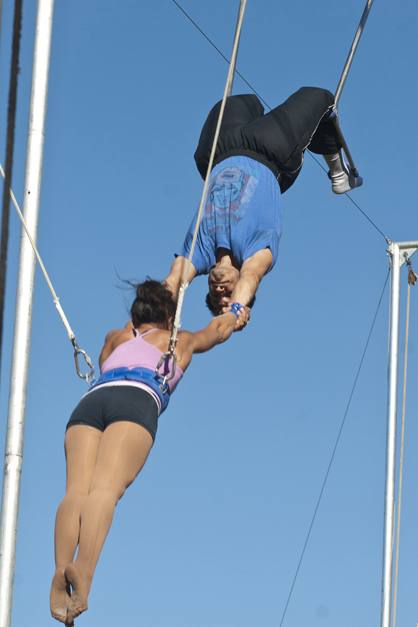 Machado said the family nature of the group has helped her in missing her own family back in Brazil. She hasn’t been home in about two years.

“I would hope to go home soon or maybe my mom could come here to visit one day, because she has never seen me fly,” she said. “I imagine if when she does see an act without all the safety practice equipment, she’s going to tell me to ‘come down from there.’”

Machado said she loves the city life with the lights and all the travel, but she has enjoyed the peaceful atmosphere Gallion provides.

The weather has also granted them an ideal practice atmosphere as some members of the group have never been to Gallion or even Alabama.

“Waking up to such quiet and hearing the birds chirping has been like heaven,” she said.

Another member of their group hails from New Zealand and came to the group through Machado telling Alex about his love for flying.

Benny Searle said though he hasn’t performed with the group yet, he is loving the chance to learn a lot more about flying. He has been in the states since Feb. 2011.

“Flying keeps the little kid in me alive,” the 28-year-old said.

Benny went to college for graphic design. Although he is doing something different, he still feels he is channeling his creativity each time he takes it to the platform.

“I have always loved sports and creativity,” he said. “In a way, this lets me do both.” 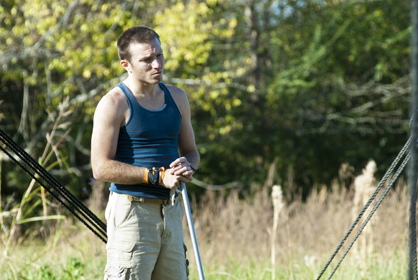 Benny Searle is new to the group and hails from New Zealand.

A young member can also be found in the group’s practice swinging from the platform looking to carry on the family’s flying tradition.

Robinson’s daughter, 11-year-old Ysabella Cortes, practices with the group while his two-year-old son Lucas looks up at an art he could likely perform one day as well.

The Flying Cortes will leave Gallion in about two weeks headed to Kansas City, Mo. to perform in a circus there. For more updates about their travels see the group’s Facebook page: The Flying Cortes.

Alex said there is so much more to the circus than what people see.

“It is not just a circus, it’s a life…it’s a lifestyle,” he said. “There are not many people that can say they love what they do, but I am fortunate to say I really love what I do.”