Atlay Phillips-Nelson of Demopolis was diagnosed with juvenile diabetes at age 5. A couple of years ago, Nelson was told her kidneys were failing and after 6-months of being placed on a recipients list she underwent surgery to receive a new kidney and pancreas this past weekend.

“When I got the call I was so overjoyed,” Atlay said. “I was also a little panicky because I wasn’t expecting it so soon.”

Atlay received a call on Friday that there was a kidney and pancreas waiting for her at Piedmont Hospital in Georgia. She was flown to the hospital by a helicopter from Bryan W. Whitfield Memorial Hospital.

This past Saturday, Atlay went through about six hours of surgery and has experienced a great recovery. The organs matched successfully, and she remains in good spirits.

“I prayed once I was diagnosed with my kidney failure, and I just put it in God’s hands,” she said. 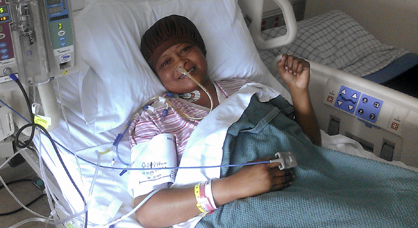 Atlay Phillips-Nelson in good spirits after she received a kidney transplant on Saturday.

Atlay said her husband and her church family has been a wonderful source of support for her during this time.

“I love my husband, God sent him to me at the right time,” she said. “and, I love my church family.”

Atlay will remain in the hospital for the next 7-10 days and she will have to stay in Georgia for about another month or so for check-ups.

Though she had only received her organs that morning, Atlay said she spent Saturday night cheering for Alabama during their fight against LSU.

“The nurses thought I was groaning, but I am a die hard Alabama fan,” she laughed as she recalled Saturday night.

She said the medicine she needs are very expensive so she will continue to need the support she has received for people in the community.

As an organ recipient, Atlay said she urges people to become organ donors.

“You never know what you are going to need or how you can help someone,” she said.