The program is now in its sixth year of honoring local firefighters. The Sweet Water VFD received the grant based on its application for new turnout gear for the town’s firefighters.

The Sweet Water grant was one of 25 presented to firefighting units in communities throughout the country.

The department needed to provide protective firefighting gear for five members; however; it had only two sets of turnout gear available, and those no longer met standards for personal protective gear.

Among those, it was one of only seven departments to receive the award at the $10,000 level. 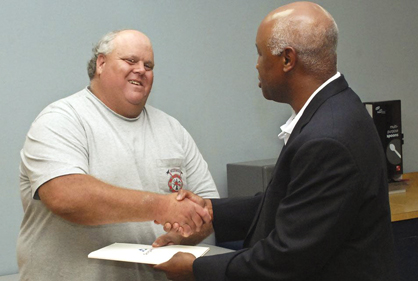 Sweet Water VFD Chief Ronnie Bishop (left) accepts a check for $10,000 from Georgia-Pacific Naheola Mill Manager Kelvin Hill representing the mill’s Bucket Brigade contribution for 2012. The Sweet Water VFD was one of only seven departments out of 25 nationwide to receive the Bucket Brigade grant at the $10,000 level.

Since 2006, the Bucket Brigade program has supported local fire departments in Georgia-Pacific facility communities through more than $1 million in contributions.

This includes awarding cash grants, providing safety education materials for school presentations and paying for memberships for all grant applicants to the National Volunteer Fire Council.

The Georgia-Pacific Bucket Brigade program is meeting critical needs particularly for fire departments in small and rural communities with a large volunteer base.