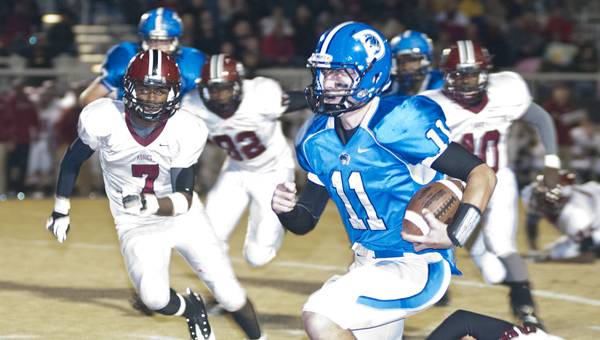 Demopolis had little trouble Friday against Sylacauga in the first round of state playoffs. The Tigers beat the Aggies 49-20 with an improved offense and solid defense.

“I’m not used to a night like this. I’m use to making tackles,” Barnett said after the game. “But I’m a senior, and I’m not ready to go home.”

Causey said he saw improvement this week in “doing the little things” after back-to-back losses to Jackson and Hillcrest.

“It was a lot better,” Causey said. “We’ve still got to work hard. I’m really proud of the team being coachable this week.”

After a scoreless first quarter, Demopolis got on the board first off an 8-yard touchdown run by Roderick Davis.

On the ensuing Aggie possession, Barnett recovered a fumble forced by Tyler Merriweather and took it back 45 yards for a score.

Barnett scored his second touchdown of the night next, when he intercepted a Sylacuaga pass and returned it 26 yards for another TD. The points gave the Tigers a 28-0 advantage at halftime.

The Aggies would get on the board in the third quarter after a 3-yard run by Ian Floyd.

Demopolis answered right back though with a 39-yard touchdown pass from Jones to Rodney Harper. Another 8-yard pass pass to Demeterius Kemp put the Tigers up 35-7.

DHS would score its sixth touchdown off a 1-yard run by Jones, his second rushing score of the night.

Sylacauga put two late touchdowns on the board but they were answered by a 40-yard run by D.J. Howell.

Demopolis (9-2) travels to Spanish Fort (10-1) next week in the second round of state playoffs.