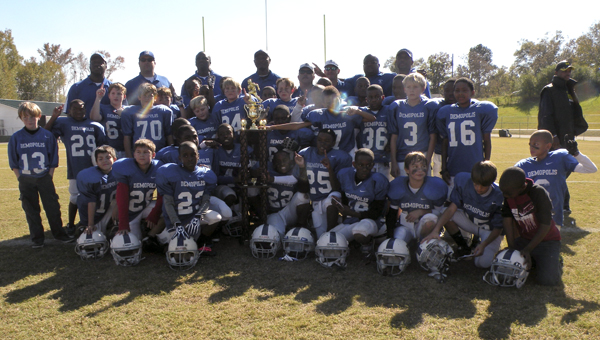 The Demopolis 10U football team capped off a perfect season Saturday in Northport with a 28-6 victory over Northport for the West Alabama Youth Football Association championship.

The Tigers finished the season with a 10-0 record, thanks in large part to their defense. Head coach Jim Logan said the first-team defense only gave up one touchdown all season long.

“We had a great season,” Logan said. “We finally won. We’ve been there several times before, and we finally won it. This team had a great year, and we won the championship with our defense.”

Logan added that on offense, the team had about four running backs that could go in at any time to give each other a breather, and that they did not have to throw the ball much all season.

“We didn’t have to throw the ball very much because our running game was so good,” he said, “but when we did throw it, our guy was usually wide open because of the running game.”

The players on this team are 9-10 years old and they will be stay in the league until they are 12-years-old. Logan said he expects this group to do well all the way through.

“The 10-year-olds have two more years in the league,” he said, “and we expect them to well all the way through. I know Coach Causey is looking forward to getting them a few years down the road.”

He added that even though the players are young, they “knew they had to stay focused all season, and they wanted to win it,” and that the coaches and parents were on the same page all season, which really helped with the success of the team.

Players on the team were: