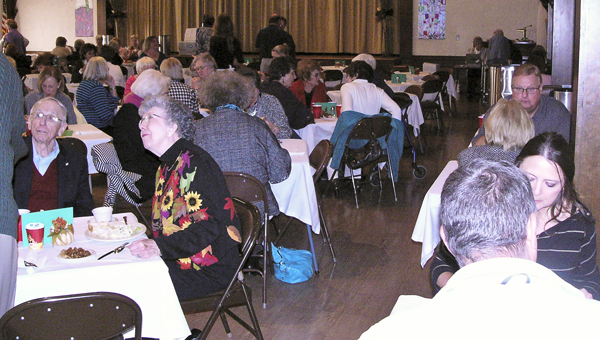 The annual United Methodist Women’s Bazaar was held Wednesday in Demopolis and hundreds of people came out to browse the multitude of items available for people to purchase.

From blankets and plates to cakes and pies to just different odds and ends, people could buy just about anything they were looking for on Wednesday.

The most popular room for people to shop around in was the bake room. Martha Griffith, a greeter at the Bazaar, has been helping with the Bazaar for nearly 60 years and said that is the first room most people go to.

“The bake room is a big hit with many people,” she said. “The Bazaar is also a great place for people to see each other that they haven’t seen in a while.”

Griffith said that even though the program does bring in a lot of money for the different charities that the church donates to, there is more to the Bazaar than that.

“Brother Luckie said it best when he said this is about people doing things for others,” she said. “It is about people helping other people. The people who receive the benefits of this don’t know where it came from, so there is no thanks involved.”

The lunch that is sold at the event brings out the largest crowd. Hundreds of people came to the Fellowship Hall of the First United Methodist Church on Wednesday to eat the chicken salad and pimento cheese sandwiches provided.

“It is amazing how many people come from near and far for lunch,” Griffith said.