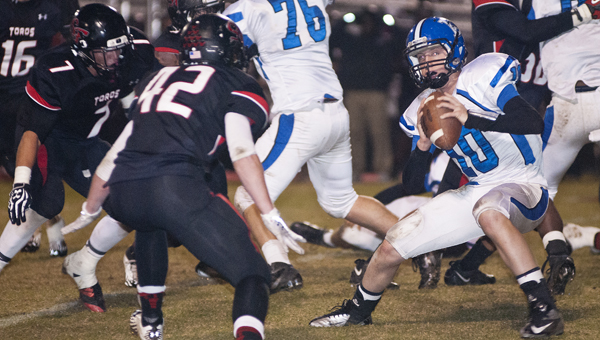 Tyler Oates played quarterback for Demopolis for most of Friday night’s game at Spanish Fort after starter Tucker Jones went out with a hand injury.

Spanish Fort beat Demopolis 38-14 in the second round of the state playoffs.

The Tigers were able to capitalize on a big opportunity early after Tyler Merriweather recovered a fumble on the Toros first snap of the game.

A few plays later, Demopolis scored off a 4-yard Tucker Jones run to go up 7-0. 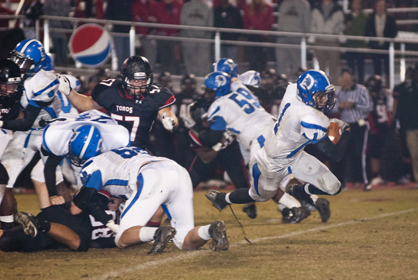 But the momentum quickly swung back to the home team.

Jones injured his hand early in the game and was replaced by backup quarterback Tyler Oates for most of the contest.

Demopolis came back in the second half and scored again off a 6-yard run by Roderick Davis to tighten the score to 28-14, but the Toros would add another touchdown and field goal to put the game away.

Head coach Tom Causey gave Spanish Fort credit for their performance and complimented his team on their play, even if everyone wanted three more wins.

“They competed all season long,” Causey said. “Our goal every season is to win a state championship. We fell short of that.”

Sammy Tolbert had three rushing touchdowns on the night for the Toros, to lead all scorers.