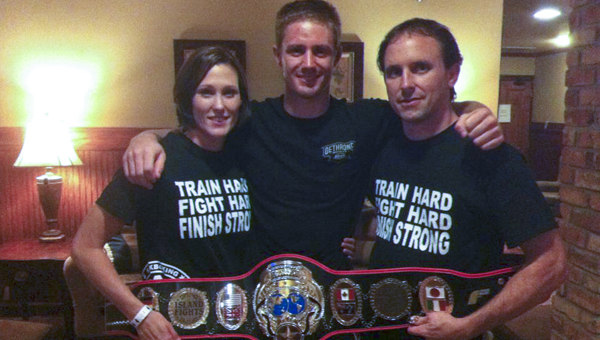 Alexander has been involved in MMA for about five years and is a blue belt in Brazilian Jiu-Jitsu. He has been training at Ross Martial Arts for the last three years, where he says he has gained a lot of valuable experience.

“They have done a lot for my career,” he said. “When I started training there, I had experience in boxing, but not much else. Since I started there, my kickboxing has gotten a lot better, as well as my martial arts. My boxing was OK already, but now I am using kicks and wrestling in my fights a lot more.”

In his young career, Alexander has a 5-1 record. This was his second title fight, and his first win in a championship fight.

He said during Saturday’s fight, he had a lot of fun with it.

“It was a good fight,” he said. “I enjoyed it. The more you do something, the more you relax while doing it. I didn’t psych myself out this time like I normally do. I just had a lot of fun with it.”

He said his opponent, Bret Adams, was a tough opponent with quick hands.

“He landed some good shots on me,” Alexander said. “He took me down twice, but I think it was more to get a breather. I don’t think he wanted to wrestle with a blue belt in Brazilian Jiu-Jitsu.”

He added that a date has not been set yet for his next fight, but he is looking forward to defending the belt.

He said he appreciates the time Ross Martial Arts owners Ronda and Jay Russell have spent with him helping him become a better fighter.

He added that he has gone with them to Texas and Virginia to train with other experts in fighting.

“They have been a great influence on me and I am grateful for my experience there so far,” he said. “MMA fighting is very family-oriented and Ross is an example of that. They teach respect, honor and humility, which I appreciate.”