The Christmas on the River 2012 Special Child is Windham Thomson Lee Jr. He is the son of Windham and Teila Lee of Demopolis. 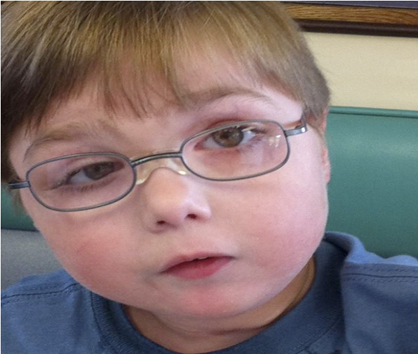 Windham was born on April 13, 2006, at DCH Regional Medical Center in Tuscaloosa. From the moment he was born, it was obvious that he had special needs. He immediately required respiratory resuscitation and life support on a ventilator. The cause of his breathing difficulty was not readily apparent to his doctors, but early on it was thought that his trachea were somehow connected causing him not to be able to breathe.

“He was a fighter from the start,” Teila Lee said. “The neonatologist said he had never had a baby fight so hard to keep the tube out of his throat.”

Windham continued his fight for two weeks at DCH, and further at UAB where he stayed for three months in the neonatal ICU.

“He had a tracheotomy from three-and-a-half weeks of age until he was 5-years-old,” his mother explained. “Now, he still has frequent infections because of his narrow airway and difficulty coughing. When he was younger, and before he could talk, we used sign language to communicate. Since I am a special ed teacher, and I knew how to sign. I taught him.”

Ultimately, after two years of extensive testing, specialists determined that Windham has Oral Facial Digital Syndrome Type I. Doctors were hesitant to make the diagnosis because of the seriousness of it.

“It’s a very rare syndrome, especially severe in boys — most of them don’t make it,” Teila Lee said. “I think they just didn’t want the label on him. The doctors continually remind us that they treat the patient, not they syndrome itself.”

Oral Facial Digital Syndrome is a term used for at least 10 apparently distinctive genetic disorders that are characterized by defects and flaws in the development of the oral cavity; the development of the facial structures, including the head, eyes and nose; and the fingers and toes, along with differing degrees of mental retardation.

Fortunately, Windham’s airway and jaw matured enough by the time he was 5-years-old and he did not have to have restorative surgery. His development delays and speech delays, however, do require speech therapy, occupational therapy and physical therapy. He receives these therapies at Westside Elementary School, where he is a student in Becky Holley’s first-grade class.

“Windham is very special to us – the other children love him,” Holley said.

“When it comes to Windham, we have gotten excellent support from our families, our community, our church and the school system in Demopolis,” his mother said.

“I hope as our Christmas on the River activities proceed you will have the opportunity to see Windham, his parent and his sister Miley. Stop and say, ‘hello,’ or wave as they pass by in the parade,” said Linde McAdams, COTR Special Child Committee Chair. “They are a very special family and Windham is the most Special Child of 2012.”