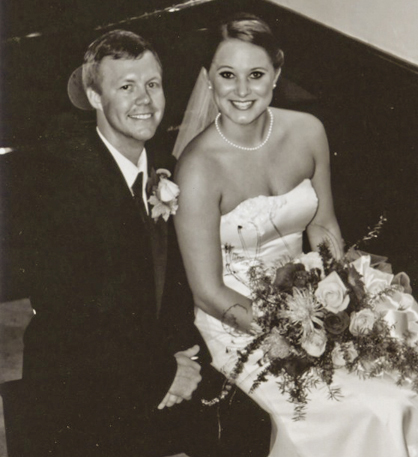 Jessica Ryan Richey and William Justin Ayres were married on Oct. 27 at 2 p.m. at Marion United Methodist Church. The Rev. Misty Roberts of MUMC and the Rev. Hank Atchison of Gallion Baptist Church officiated the ceremony.

Given in marriage by her father, the bride wore a white strapless gown with a cathedral veil and carried a bouquet of red and orange roses and red Gerber daisies.

Jamie Taylor, sister of the bride, served as matron of honor. She wore a strapless red gown and carried a bouquet of orange and red Gerber daisies. The flower girls were Ella and Alle Quarles, nieces of the groom.

The groom’s father, Ricky Ayres, served as best man. Serving as ring bearer was Foster Hinton, brother of the bride. Ushers were Whitfield Taylor, nephew of the bride, and Logan Gills, cousin of the groom. During the Unity Ceremony, Garrett Baker, cousin of the groom, sang “God Gave Me You.” He was accompanied by pianist, Mary Jo Davis.

Following the ceremony, a reception was held at The Excess House.

The following showers were given in honor of the bride and groom:

A miscellaneous shower was given at the home of Judy Moseley in Gallion and was hosted by Connie Andrews, Brenda Crocker, Donna Moseley and Judy Moseley.

A miscellaneous shower at the home of Faye Lane in Selma was hosted by Tonya Cothran, Cammie Lane, Pat Reed and Faye Lane.

A miscellaneous shower at Forkland Church was given by church members.

A couples tool and garden shower was given at the home of Bill and Jean McCarter in Demopolis and was hosted by Terry and Kim Fraser, Jimmy and Janet Marlowe, Bill and Jean McCarter, Randy and Kathy Morgan, Kenny and Deborah Phillips, Tony and Mallie Quarles and Melvin and Terry Yelverton.

A gift card shower was given by co-workers of the bride at MedCenter Demopolis.