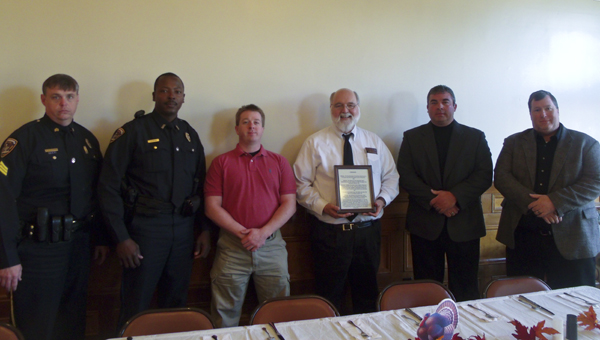 Police officers were honored during the worship service of the First Presbyterian Church this past Sunday. Shown in the photo is Sgt. Rex Flowers, Officers Kevin Johnson and Darryl Reeves, Pastor Tommy Carr, Sgt. Daryl Bowden and Sgt. Tim Soronen.

Police officers gathered during the worship service at First Presbyterian Church this past Sunday to be recognized by the congregation for their service to the city.

The recognition took place during the 11 a.m. worship service with pastor Tommy Carr reading a resolution in honor of the department.

There were several officers in attendance to the service, who engaged the worship service including song, prayer and the sermon.

“We want to honor our officers and thank them for their protection of the city of Demopolis,” Carr said.

He said during the reading of the resolution that he also is thankful to the families of the officers as well.