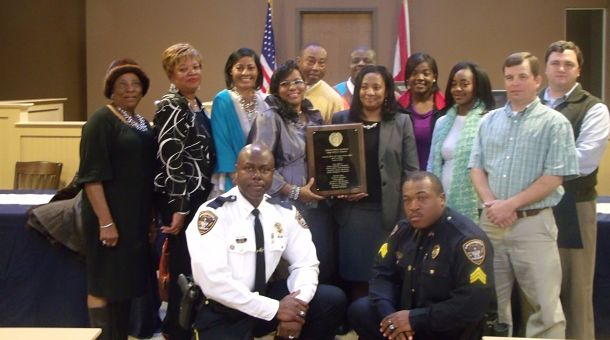 Eight weeks ago, 11 Demopolis residents who signed up for the Citizen’s Police Academy had no idea what expect.

Now weeks later after a visit to the firing range, classes on DUI investigation and Cyber crimes, they are now graduates of the academy and prospects to join the Academy’s alumni association.

Graduates were awarded certificates and pins Sunday by Demopolis Police Chief Tommie Reese at the Academy’s fifth graduation since its inception in 2010.

Though, they were unable to extend the class, Reese said he hopes they all learned a lot more about the department.

Laughter was sprinkled throughout the ceremony as it was obvious throughout the weeks, the students created a bond with the leading officers including Sgt. Richard Bryant and amongst themselves.

“Throughout this time we have learned to appreciate each other and care about one another,” Bryant said throughout his opening remarks.

Mayor Mike Grayson then addressed the class and family and friends, who attended to support the graduates.

“I think anyway we can get the community involved, makes us that much stronger as a community,” he said.

As many graduations include an address, this class heard words from Hester Brown, a CPA Alumni of this year’s previous graduating class.

“I took this class as a way to reacquaint myself with Demopolis after being away,” she said. “I was born here, but left and came back.”

Brown spoke about the role the Demopolis Citizen’s Police Academy Alumni Association serves to support the needs of the department.

She urged the graduating members to join the association and work alongside those already in there to enhance the efforts already in place.

Reese said he hopes the graduates enjoyed the classes including DUI investigation, K9 training, the police ride along and defensive tactics to name some of the topics they studied.

Winston Muhammad finished the citizen’s police academy alongside his wife, Aretha, and said he enjoyed the class.

“We, as citizens, have to continue to be eyes and ears for them (policeman),” he said. “We could do a lot to save our communities by helping our policeman a little bit more.”

The next Citizen’s Police Academy will be offered in the Spring of 2013. Applications for the class can be found now on the police department’s website www.demopd.org.