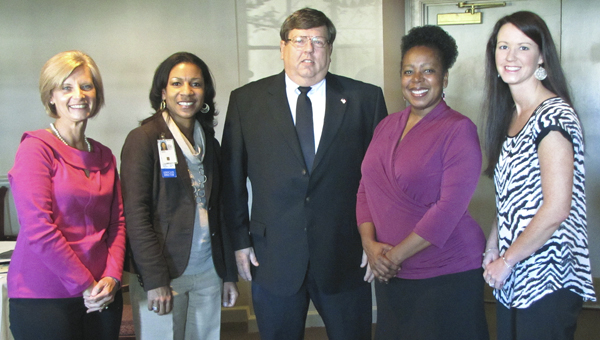 Five area hospital employees, including one from Demopolis, were recently honored for their contributions to health care at a reception in Tuscaloosa hosted by the West Council of the Alabama Hospital Association (AlaHA).

The luncheon is one of seven regional awards presentations being held as part of AlaHA’s 10th annual statewide “Hospital Hero” award contest, which recognizes the value of health careers and honors hospital employees who have demonstrated exceptional dedication to the health care field. The contest will culminate with a banquet in February where up to 10 of the regional winners will be honored as statewide Hospital Heroes.

Deborah Bambarger of Bryan W. Whitfield Memorial Hospital was among those who were honored.

Bambarger has worked in two separate divisions at Bryan Whitfield Memorial Hospital. For several years, she served as administrative assistant for the hospital’s home health agency.

When her supervisor Cathy Hughes was promoted to division director of patient care services, she took Bambarger with her because she was so impressed by her performance.

“She always went out of her way to make the patients and families feel like they were very special when they called or visited the agency. She always looked for ways to meet the patient’s needs and do so in a cost-effective way, and she brought those same traits to patient care services,” Hughes said.

Bambarger’s co-workers often speak of how much they appreciate the time she takes to listen to the concerns of both patients and employees. They also admire her work ethic, which they say carries over to her personal life as well.

Bambarger’s three children were active in school, church and community activities, and she always supported their involvement while being involved in her own community activities as well. The respect she has earned over the years resulted in her peers recognizing her as the hospital’s employee of the year for 2011.