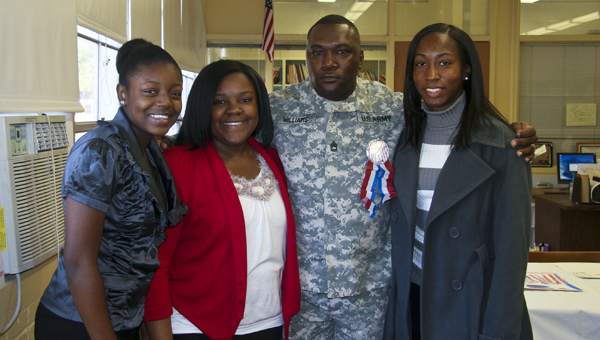 The students and faculty at Sweet Water High School honored its veterans’ with a special reception and program Monday, Nov. 19.

The colors were posted by the V.F.W. Post 5106 and senior Janae Williams sang the National Anthem.

The guest of honor was S.F.C. Avery Williams, who was a 1989 graduate of Sweet Water High School. He joined the Army Reserve in 1989 and was deployed to Saudi Arabia in 1990 during Desert Storm/Shield. He has been in the military for 23 years. Williams spoke about what the Pledge of Allegiance meant to him.

The program continued with poetry readings by Olivia Blakeney and Danny Nevils.

Andy Black completed the program with the song “The Bravest Man I Know.” After the program concluded, the students were able to meet the veterans.

The decorations for the program were created by the elementary art classes led by DeeAnn Hilderbrand. They included a wreath that is currently hanging over the permanent veterans’ display in the foyer of our school and a flag that served as the background for the program.

Pictured are some of the Sweet Water students that participated in the can drive including Kaharri Cowan, Erin James, Chynna... read more