As a teenager growing up in Hugo, Oklahoma, she had a pony named “Lucky.” Lucky was a small palomino, and Ernestine groomed her and rode her daily. She later won riding trophies at the University of Oklahoma, as a result of her pony Lucky.

And she leaves behind five lucky boys whom she reared and groomed for adulthood with an eye toward each of them too winning trophies in their lives as adults. She died in her sleep peacefully on Nov. 23, 2012. Her husband of 60 years, James Beeland Rogers, Sr., predeceased her in 2001.

Ernestine was welcomed into the world on Aug. 21, 1919, by her late parents, Gladys Mabry and Otto Adolph “Dutch” Brewer. Her maternal grandfather, Dr. Ernest Mabry, delivered her in Beaumont, Texas. She grew up an only child in Hugo, where her daddy was a lawyer and her mother a radio and newspaper journalist. 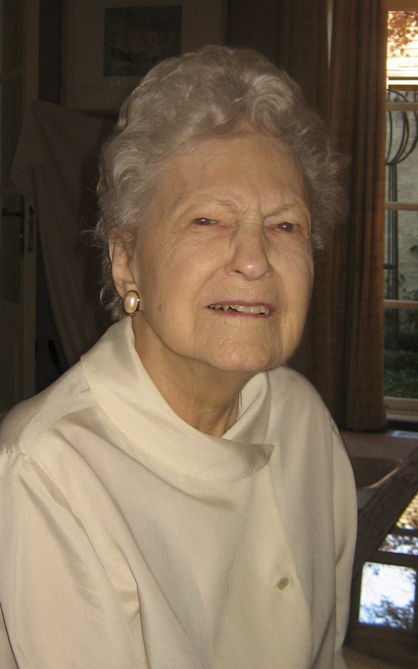 She went to the University of Oklahoma where she was a member of her beloved Kappa Kappa Gamma sorority and her much-honored Phi Kappa Epsilon honorary fraternity. She met her future husband, Jim, a petroleum engineering major at OU, and they married before she graduated, so that he could join the army as hostilities seemed imminent. She met him at the SAE house next door to KKG, introduced by her parents, each themselves members of SAE and KKG respectively. Her childhood in Oklahoma earned her the endearing nickname, “Boomer.”

After the war, they moved to Demopolis, where they lived until Jim died, and where she called home at the time of her death. She was active in her church, Trinity Episcopal, serving on the vestry. She was a founding member of the AAUW chapter in Demopolis, and was a founder as well of the Bargain Box, a charitable resale store in Demopolis which awards scholarships to deserving young people. She taught herself bookkeeping and worked as such for several housing authorities in the Black Belt. When she “retired” from that work, she spent countless joyful hours at the Bargain Box.

Kirk Funeral Home in Demopolis is in charge of the burial arrangements. The boys have many people to thank for the care and attention shown to Boomer in the last years of her life. In particular, the staff at Brookdale Place, Birmingham, and her attendant, Donna Carroll, have been wonderful.