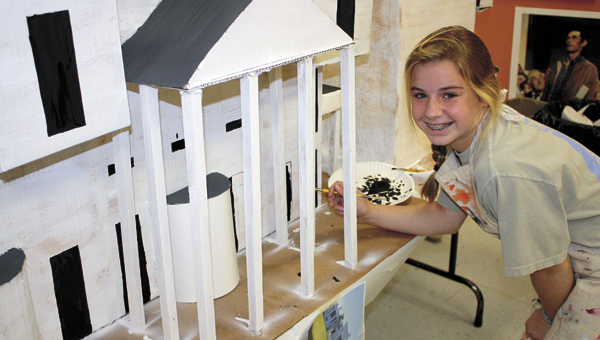 Hannah Webb puts the finishing touches on one of the Gaineswood creations.

Teams of students created two each of seven models of historic Demopolis area buildings. This week the constructions are being placed on the grand final float of the parade so that it appears Santa Claus, his sleigh and reindeer are flying over the city. 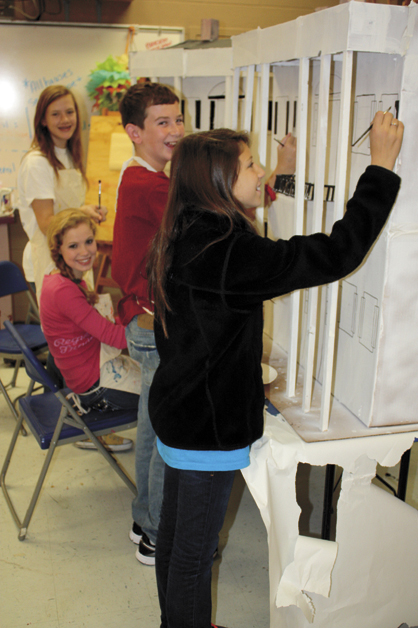 Shown are some of the DMS students working on the project. Madelyn Brooker, Cheyenne Martin, Banks Compton and Caroline Poole work on the Bluff Hall constructions.

Her seventh grade visual arts class made the buildings, and another art class and her history class did the painting.

When Diane Brooker, day parade chairman, approached Mayben about doing the project for COTR, the teacher jumped at the chance. “I can teach all of the aspects of art with one project,” she said.

All of the designs are the work of the 35 students. Whenever they came to Mayben with questions on how to do something, she told them, “You figure it out.” And they did.

Among the construction challenges faced by the students were the balconies on Lyon Hall and the chimneys of Foscue House. Getting the group organized and learning to compromise were lessons learned as well. “A team works better than one,” they decided

Mayben, now in her second year teaching art at DMS, said each team came to rely on the skills that each member brought.

“They brainstormed to come up with the best way” to represent the buildings, Mayben said. With lots of hot glue and tape they managed to shape the boxes to look like the architecture of the project they were given.

“I’m so proud of this group,” Mayben said.

As part of the project, the students were taken on a tour of the seven buildings by Marengo County Historical Society curator Kirk Brooker. Not only was the tour fun but they learned a lot, such as how the buildings were made, what a buttress does and what a belvedere is. They also thought it was interesting that so many of the buildings had family connections.

None of the students said the assignment was easy, but they found that working together was one of the fun aspects.

As a reward for their hard work, the students who want to will be riding one of the parade floats and tossing favors to the crowd.