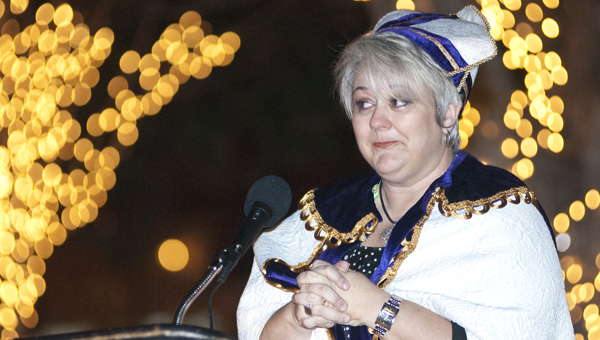 Kelley Tarpley addresses the crowd after being crowned St. Nick.

Before Katie Windham named this year’s St. Nick she read from letters written in support of the community member who will wear this year’s crown.

“This Demopolis native is community minded, has a heart for youth and a can-do attitude and is reflective of the spirit of Christmas all year long,” Windham read. 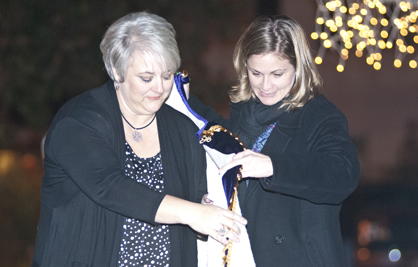 After reading other information about the librarian, mother and friend, the audience applauded when Kelley Tarpley was named this year’s St. Nick.

Tears nearly filled Tarpley’s eyes as she was given the crown at the Thursday evening event.

“I would like to thank the people who nominated me,” she said. “I am thankful for this honor.”

Tarpley, who works at Demopolis Public Library, said she has experienced many year’ of Christmas on the River. However, she said this honor makes this year a “little more special.” 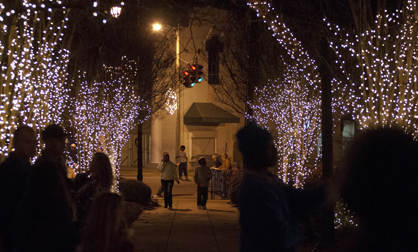 The Public Square in downtown Demopolis all lit up.

Those in attendance also counted down with Mayor Mike Grayson for the lighting of the public square. At the count of 1, more than 400 strands of lights came on, radiating through the square.

Windham gave thanks to the city employees, who worked to stream the lights through the trees. 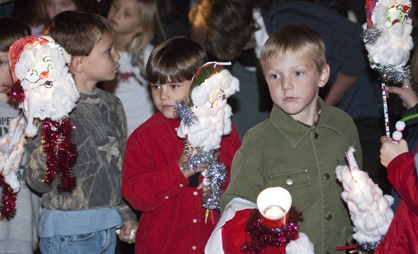 Sprinkled throughout the program, Windham drew names from the Westside Elementary students who participated in the Lantern Parade.

Afterschool program students smiled as they held their lanterns high marching around the square, through the crowd and in front of the stage.

In addition to naming St. Nick, the Christmas on the River elves also made an appearance. Demopolis Middle Schoolers Jordyn Smith, Sarah Margaret Veres and Rose Hall are this year’s COTR elves and will be seen helping at the events throughout the week. 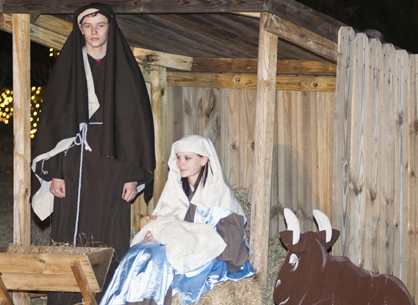 Logan Boone and Bailey Petrey portray Mary and Joseph during a reading of the Nativity from Trinity pastor John David Barnes.

At the heart of the event was the reading of the Christmas Story by John David Barnes, priest at Trinity Episcopal Church.

Throughout his reading, DHS students Bailey Petrey and Logan Boone were dressed as Mary and Joseph.