After teaching for 30 years in Alabama and retiring from Demopolis, Kathy Moody continues to make her mark in the classroom.

Moody is in her 36th year of teaching, now as a pre-algebra teacher at Northeast Lauderdale Middle School in Meridian, Miss. and the most recent recipient of the Golden Apple Award.

Moody received the award, which is given monthly to a teacher in Mississippi, working in either Lauderdale, Neshoba, Kemper, Clarke, or Newton counties and in Alabama working in either Choctaw and Sumter counties. There are several sponsors that make the award possible.

Moody has her roots in Demopolis after growing up and continues to live in the area. She is a former teacher at U.S. Jones Elementary and Demopolis Middle School.

Moody said although, she makes an hour drive to the school every weekday morning, it is a drive that is certainly worthwhile.

“It is definitely a great school, the students, the faculty and the principal make it a fine and outstanding school,” she said. 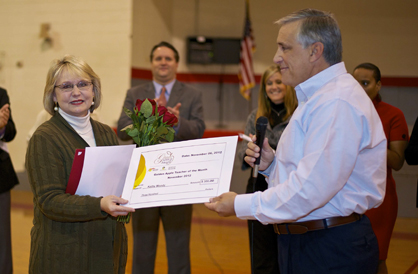 Kathy Moody of Demopolis recently received the Golden Apple Award at her school, Northeast Lauderdale Middle School in Mississippi. She is shown receiving her award from Bo Pittman with MUNA Federal Credit Union.

The presentation of the Golden Apple Award comes with a trophy, a check for $300, and a voucher for $1,000 in school supplies.

Though Moody makes the drive to Miss., she still lives in Demopolis and said she loves the schools here.

“I definitely love Demopolis and its school system,” she said.

Moody said she was told 20 students nominated her for the award, which calls for a 500-word essay on why the teacher should be considered.

“It really humbled me to receive the award,” she said. “Some of my former students nominated me, and it was such a great honor because I really love teaching.”

One thing students highlighted in their nominations was the fact Moody incorporates songs as one of her methods in teaching.

“When I teach I definitely give it my all, I give it everything I have,” she said.