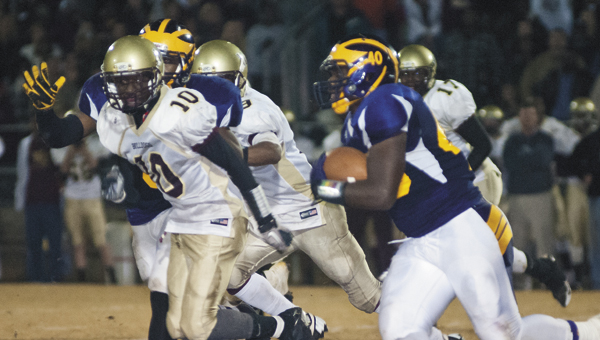 For the first time since 2005, Marengo County will not be represented in the Super Six.

The Sweet Water Bulldogs fell in a high-scoring battle to the Washington County Bulldogs on Friday night 41-33.

Head coach Stacy Luker was proud of his team’s effort in the game and all season long.

“Our guys didn’t quit,” he said. “They threw knockout punches numerous times, but our guys had heart and kept us in it. We needed a stop all night and we couldn’t get it.”

In the first quarter, things were pretty even. Sweet Water opened the scoring with a 12-yard touchdown pass from Brett Davis to Demarcus Gamble to give the home team a 7-0 lead.

On the very next play from scrimmage, Washington County’s player of the game Tyrone Kidd took his first score to the house on a 78-yard run. A missed extra point left Sweet Water with a 7-6 lead.

Halfway through the second quarter, Washington County took their first lead of the night on a 2-yard run by DeAnthony Holcombe. They converted their 2-point conversion attempt to take a 14-7 lead.

Sweet Water was able to answer with a big play of their own. Jakoby Aldridge took a handoff 59 yards for a score, but the extra point attempt was no good, and Sweet Water trailed 14-13.

The visitors did not relent, though, and scored once more before halftime on a 31-yard run by Holcombe to give them a 21-13 lead going into the half.

The third quarter was filled with scoring plays by both teams, which set up a nail-biting fourth quarter.

Sweet Water opened the scoring in the second half on a bruising 46-yard run by Deion Waters. A failed 2-point conversion attempt left the home team trailing 21-19.

Washington County answered with a long touchdown run of their own. Kidd took another one to the endzone, this time from 46 yards out, to give his team a 28-19 lead.

Sweet Water did not let the big play get them down, though. They put together another scoring drive that included a converted fourth down. It was finished off by a 14-yard TD pass from Davis to Gamble once again. This brought the home team within two again, 28-26.

It didn’t take long for Washington County to answer back again, though. Kidd rattled off another long TD run, this time from 48 yards.

With only 14.6 seconds left in the quarter, Sweet Water pulled back within two points on a 36-yard TD run by Daniel Sewell. The score at the end of the third quarter was 35-33.

The fourth quarter only saw one score, and it was on a 25-yard pass from Dane Howard to Kerri Pennington to seal the victory and a trip to Auburn for the Super Six for Washington County.

“The seniors responded well,” Luker said. “We challenged them at halftime, and they responded to it. This group has a championship and three semi-finals. They don’t see it right now, but 10 years from now, that will mean a lot.”

Sweet Water’s first season in Class 2A ended in the same round their final season in 1A did, but Luker said it was a fun season.

Washington County will go on to play Tanner next week in Auburn for the state championship.