Christmas on the River huge success 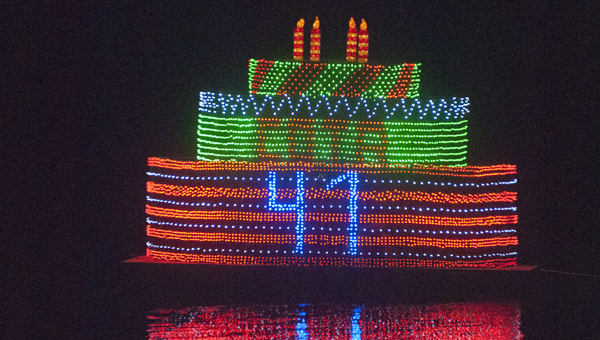 The Christmas on the River birthday cake float headlined the night parade on Saturday night.

Christmas on the River brought out a large number of people this year, and there has been a positive response from the community.

Jenn Tate, executive director of the Demopolis Chamber of Commerce, said everything she has heard has been nothing but complimentary.

“From what I’ve been hearing so far,” she said, “everything went well. The chairpersons were outstanding. With the barbecue cook-off, David Anderson did a great job. It was a huge success this year.”

She added that Chief Tommie Reese has estimated the turnout to be more than 20,000 people.

She also said there were fewer sponsors this year, but the event could not happen without them.

“We had fewer sponsors and different ones this year,” she said, “but we can’t do it without the memberships and sponsors. It takes good volunteers and sponsors to put it on. I learn more every year about how to make next year’s event better, and when we get this response, we are looking forward to next year.”

Diane Brooker, chairperson over the day parade, said she felt the parade was a huge success, along with every event over the weekend. 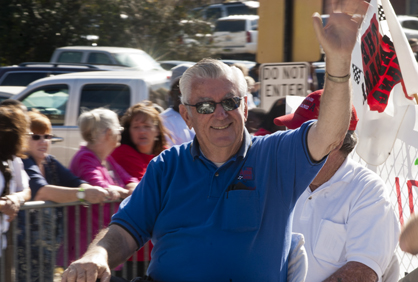 Bobby Allison waves to the crowd during the COTR day parade. He was one of the grand marshals for the parade, along with Donny Allison and Red Farmer.

“Overall, the day parade was a success,” she said. “There was a great combination between the board creating new floats and the individuals in the community with their floats to make it a success.”

She said there was no empty space on either Strawberry Avenue or Walnut Avenue, whereas last year, there were some open spaces on Strawberry.

“There were fewer people at the night parade,” she said, “but I think that was due to the SEC Championship Game. The weather was perfect for everything, so that contributed to the crowds. Every event was well-attended and well-organized.”

“We had one new float this year with Santa,” she said, “and we updated others with LED lights. This is my second year over the night parade, and I think there was a slight delay because of the football game, but after that, people came out.” 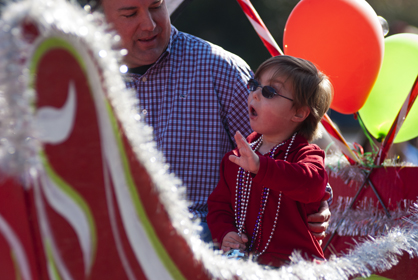 Etheridge will move from being a member of the board to the president of the board in February to take John Scales’ place, and she plans to continue to improve the parades.

In addition to the parades, Etheridge said she felt that everything over the weekend went well.

“The fair in the square and the barbecue cook-off got good reviews,” she said, “and the day parade was a really big hit this year.”