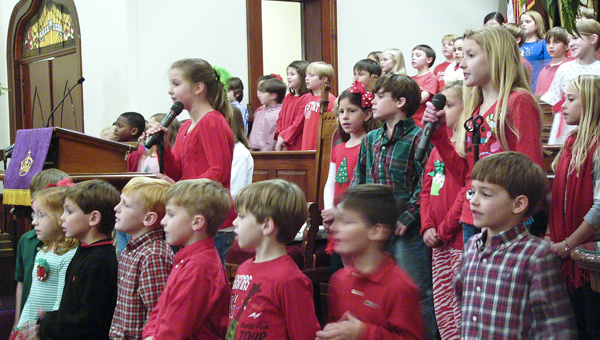 Approximately 80 children from kindergarten through fifth grade took to the state Wednesday evening in front of parents, grandparents and friends to sing traditional and contemporary Christmas songs.

The adult choir will present a Christmas Cantata, “Behold the Star” by Lloyd Larson, this Sunday at 11 a.m. 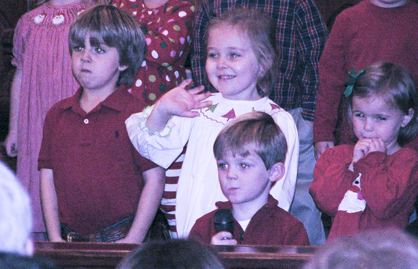 The three and four -year olds began the concert held Wednesday night. Shown are some of the singers including Hamilton Pettis, Mary Carlton Parten, Maddie Magro and Jack Pritchett.

The program will took the audience on a musical journey through the Christmas story, said Gay Zodun, FUMC music director.

“We do a different one every year,” she said. “I went to conference and heard this particular one done.”

The cantata includes about seven songs, including “Light of the World” and “The Star Still Shines.” It will last about 30 minutes.

Church members Keith and Kelly Kirkham will serve as narrators of the story.

In addition to the events at FUMC, there are several other churches hosting services throughout the month of December.

Children of the church will perform a Nativity play during the first service and the service typically tends to be heavily attended, as far as Trinity is concerned, Barnes said.

The children’s choir will hold their Christmas pageant Sunday, Dec. 9 at 6 p.m.

The Sanctuary choir will be joined by an orchestra from Tuscaloosa for the musical, “A Time For Joy,” next Sunday, Dec. 16 at 6:30 p.m.

The church will also hold a Christmas Eve Communion Service at 6 p.m. on Monday, Dec. 24.

The choir for the church will be presenting a series of much each Sunday of Advent. This includes special readings, storytellings, lighting of the advent candle and music.

It is included during each week’s worship service at 11 a.m.

The Candlelight Communion service will be held on Sunday, Dec. 23rd at 6 p.m. The morning worship service is at 10:30 a.m.

The church will hold their annual Christmas program during the regular morning worship time at 10:30 a.m.

To have your church events included in the newspaper email calendar@demopolistimes.com.