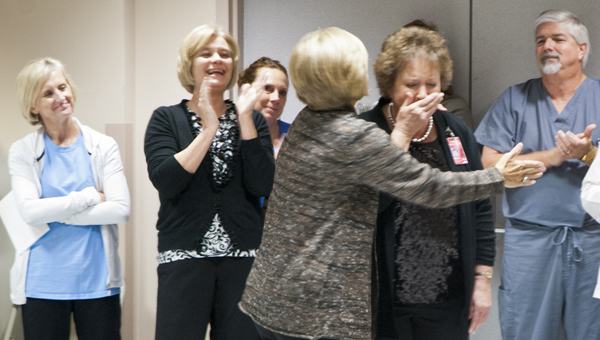 Marsha Pugh reacts to being named Bryan W. Whitfield Memorial Hospital's employee of the year for a third time.

During the event, Assistant Administrator Arthur Evans announced the department of the year and employee of the year. A long-time employee also retired.

The department of the year for 2012 was the radiology department.

Ronnie Abrams, Donald Richardson and Randy Dearman accepted the award on behalf of the department. 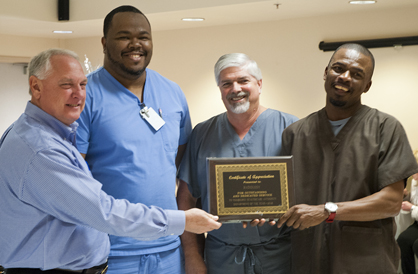 Radiology was named the department of the year during Friday's party. Shown with assistant administrator Arthur Evans is Ronnie Abrams, Donald Richardson and Randy Dearman.

For employee of the month, Marsha Pugh was named for the third time in her career.

Pugh said it is the greatest honor to her.

“Nobody has ever gotten it three times,” she said. “I love this hospital and the employees. They are like family to me. I am humbled and I really appreciate it. I am shocked and happy.” 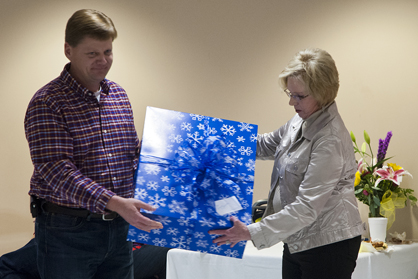 Aloma Johnston, who is retiring after 27 years at BWWMH, was also honored Friday. She is shown with Jim Peppenhorst.

After 27 years at BWWMH, the Health Information Management supervisor and coding coordinator Aloma Johnston, is calling it a career.

Jim Peppenhorst, who worked with Johnston, said he learned everything he knows from her.

“I learned so very much by working with her,” he said. “She taught me everything I know. She is just fun to be around.”

Johnston said she thoroughly enjoyed her time at the hospital.

“I would not have stayed so long if I didn’t love it here,” she said. “The employees and how they treat patients is incredible. It has always been a facility I’ve been proud of, and I still am.”