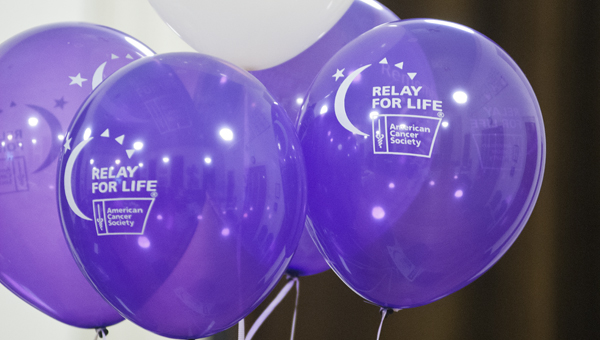 Imagine a world with more birthdays.

Those words were printed on balloons that decked tables Monday at the kickoff for the 2013 Marengo County Relay For Life.

The kickoff was the first of several meetings and other events that will lead up to the 2013 Relay For Life on May 10. This year’s theme, “Teaming Up For A Cure,” was also announced Monday.

During the fun event at Rooster Hall, teams from 2012 that increased their fundraising were recognized.

Rock-Tenn was awarded a trophy for raising the most money last year with a total of $40,000, which increased from the previous year of $36,000.

The year 1985 was the first Relay, and since the event has grown to be held all over the globe.

“Cancer has no borders, it does not discriminate,” Mills said.

This year’s Relay for Life event chair Doris Stephens is no stranger to the event. She has worked with the event as team captain for the Wal-Mart team in years past.

Cecil Williamson will team up with Stephens to work as the survivors chair for the event. Each Relay for Life begins with the survivor’s lap. A party is also held in their honor each year.

Williamson said she has had many family members affected by the disease, which drives her to continue to work with the American Cancer Society.

“I do Relay for a very personal reason,” she said. 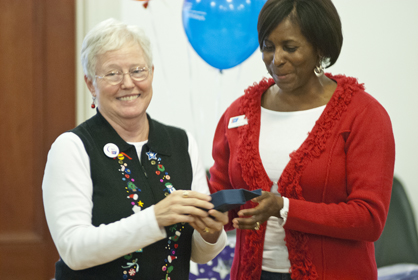 Cecil Williamson receives an award for her volunteer work with the American Cancer Society. She is shown with Bridget Mills of the ACS.

Williamson was also recognized at the event for her outstanding volunteer work with ACS during the 2011-2012.

Last year, the event raised about $70,000 and Stephens said they want to continue to do better this year.

“This year we want to have 50 teams,” she said. “We need to build up the momentum in Marengo County.”

Teams can register online at www.relayforlife.org/marengoal.

“One day we will live in a world where no one will have to hear the words ‘You have cancer,’” Mills said.