Authorities are currently searching for Akeem Benison, 20, who is wanted for three counts of armed robbery in the Demopolis area. 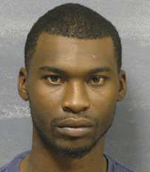 Benison is wanted in connection with a robbery that occurred at night on Wednesday, Dec. 12 at the BP Service Station near Church’s Chicken Highway 80 east (Diamond Gas station).

He was last spotted by officers near the Lloyd Chapel Road area in Forkland on Thursday, Dec. 13. Officers then closed off the area and called for air support from the Tuscaloosa County Sheriff’s Office helicopter.  After six hours of searching the very wooded area, the suspect avoided capture.

Demopolis Police Chief Tommie Reese is asking the public to help get this person off the streets before he hurts someone or gets hurt himself.

Benison is considered armed and dangerous. Authorities believe he is possibly being assisted in his flight from law enforcement.

DPD last investigated an armed robbery of the Diamond Gas Station which occurred back in September.

Check back for updates as they become available.