Akeem Benison, 21, was brought to the Demopolis Police Headquarters Thursday night where he was arrested on seven counts of armed robbery in the first degree. 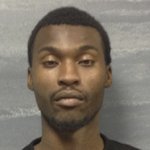 Benison was wanted in connection with a robbery that occurred at night on Wednesday, Dec. 12 at the BP Service Station near Church’s Chicken Highway 80 east (Diamond Gas station).

Benison lead officers on a manhunt in the Forkland area on Thursday, Dec. 13. Officers then closed off the area and called for air support from the Tuscaloosa County Sheriff’s Office helicopter.  After six hours of searching the very wooded area, the suspect avoided capture.

Around 9:40 p.m. Thursday night, the family of Benison contacted Demopolis Police Chief Tommie Reese at his home wanting to turn him in.

All of the robberies occurred at the same location over a period of time.  Investigators found out during the interview that Benison would flee back to Greene County after robbing the store.

“I want to say thanks to the family for their cooperation and also commend my department for their determination in bringing this person to justice. Thanks to all agencies that assisted in the search,” Reese said.