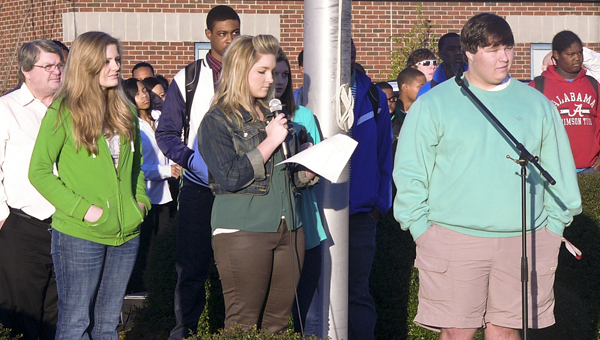 “We just want to remind everyone that no matter how bad things are getting nowadays, we still have the Lord,” FCA president Skyler Browder said.

Principal Leon Clark said he asked Coach Danny Wasson to help organize the program after the school board asked schools to honor the victims.

FCA student Susanna Speegle said it was very special for her to be a part of the program.

“My dad is a principal and my mom is a teacher, and I know this program is something special to everyone, because it really devastated all of us,” Speegle said.

Madelyn Couch said she found the program to be important to let people know that “God is still in control.”

“I think it is important to know there is something greater in control,” she said.

Tiffany Williams, another FCA member echoed Couch’s sentiments and added it is important for people to remember the victims in this tragedy. 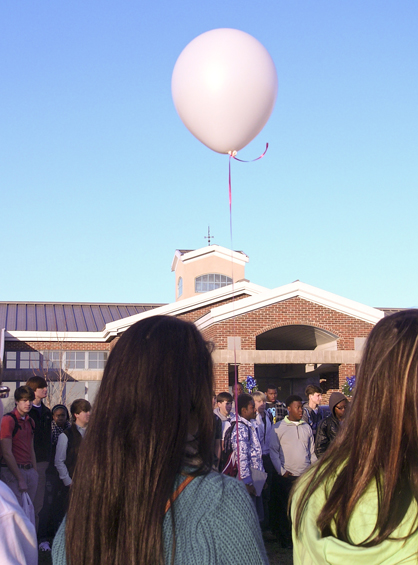 DHS student holds a balloon, which was soon let go in honor of a victim of the Sandy Hook Elementary School shooting.

The students gathered around the flagpole, which was at half mast, to hear scripture and a word of prayer.

Couch also read a list of the names of the victims as a bell was rung and a balloon was let go in their honor.

Many students bowed their head throughout these moments, many dressed in Sandy Hook Elementary School’s colors of green and white.

Clark said listening to the students comments on the importance of the program is why the event was so important.

For these students, this tragedy had no borders in relation to its impact. Madelyn said it is important for the students to all come together.

“Even in small town Demopolis, we are paying tribute to them,” Madelyn said. 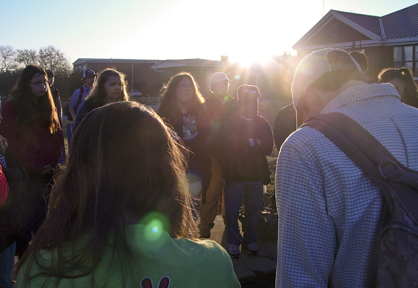 Demopolis Middle School students bow their heads and listen as they all discuss their thoughts on Friday's shooting at Sandy Hook Elementary School in Newtown, Conn.

Students at Demopolis Middle School also gathered at the flagpole to remember the victims of the shooting.

The student-led gathering was filled with prayer and also served as a time for the students to voice their thoughts on last Friday’s events.