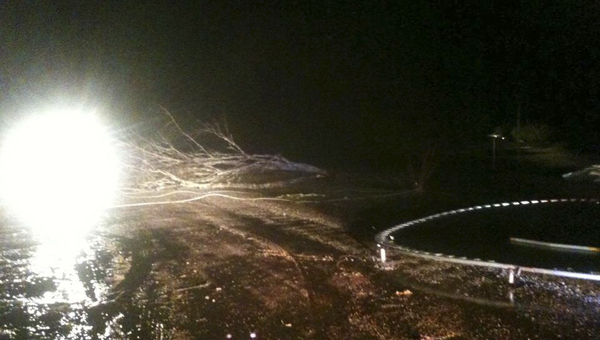 Trees, a trampoline and downed power lines cover Sunset Road in Demopolis. No injuries were report in storm damage there.

Several homes were damaged but no injuries reported after severe storms rolled through Demopolis on Christmas night.

The damage is mostly on the east side of town. On Sunset Road, two camper-trailers and one mobile home were destroyed and other site-built homes were damaged. All three trailers were unoccupied at the time the storms struck.

Demopolis Fire and Rescue Chief Tommy Tate said one the camper trailers was picked and thrown into the other.

There was also damage on Old Springhill Road, Reed Drive, James Drive, Eastern Circle and back to Jefferson Road. All those streets are south of U.S. 80.

A tractor-trailer was overturned on Russell Drive and trees were down on Alabama 43, according to Police Chief Tommie Reese.

No injuries were reported in the storms as of 8 p.m. Everyone in the affected areas has been accounted for, Tate said.

All roads and streets have been reopened except for Reed Drive as of 9 p.m. Tuesday.

The damage occurred from 5:30-6 p.m. while the county was under a tornado warning.

Check back for updates as available.