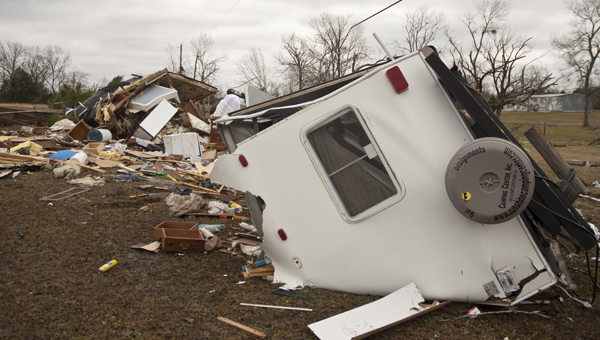 A camper that was blown several feet during Tuesday's storm.

One thing David Hampton will remember after Tuesday’s EF-1 tornado rolled through eastern Demopolis is every second counts.

Hampton was just a few minutes away from arriving to his mobile home when the twister struck. The storms picked up his trailer and threw it several yards from its original spot.

“We were about in Tuscaloosa, coming home from the hospital,” David’s son, Steve Hampton said. 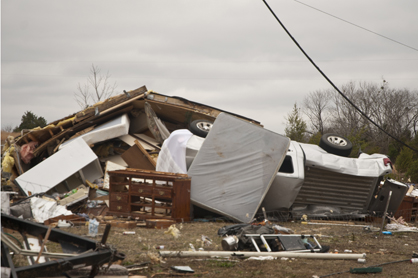 Hampton was coming home from a Birmingham hospital after a bout with pneumonia. He and his son returned to Demopolis to find the trailer slammed and a pick-up truck tangled in the rubble.

David said he is thankful for his family and friends for the help they were providing Wednesday morning as they look through what remains.

“I lived alone, but I have a lot of friends helping me,” David said. “We are just so blessed, all this can be replaced.”

Nearby, the steeple of Demopolis Church of the Nazarene now rests yards away from the church in a field. Church members worked Wednesday morning to repair the damaged tin roof, which was covered with a blue tarp.

Several other Demopolis families spent Wednesday cleaning up from the Christmas storms.

Lloyd Hendrix wasn’t at home with the twister struck, but he did return to find the storm left his 18-wheeler turned on its side. He was suppose to use the truck to go to work Wednesday. 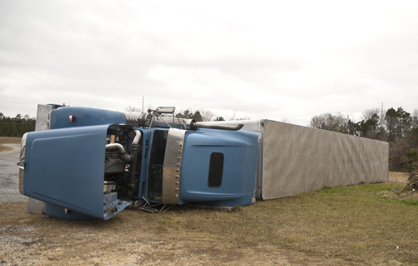 An 18-wheeler was turned on its side after the Christmas Day storm.

Hoping the truck isn’t too badly damaged, Hendrix said he is waiting for help to come and turn the vehicle back upright.

Winds tore the shingles from the roof of Russell’s residence and turned over her snowman decoration.

City officials were also in the area working to clear roads of broken trees and debris. 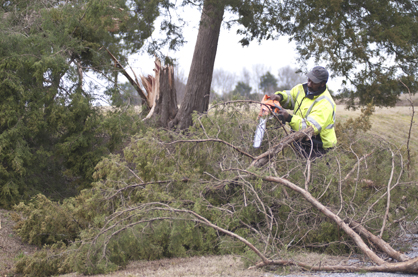 City officials are shown helping to clean up some of the damage.

Carrie Rowser, a resident near the Old Springhill Road area, was at work when she returned to find her home of about 30 years damaged from the storm.

Rowser’s home sustained substantial damage. Pieces of her neighbor’s patio were blown into her yard and onto her car. 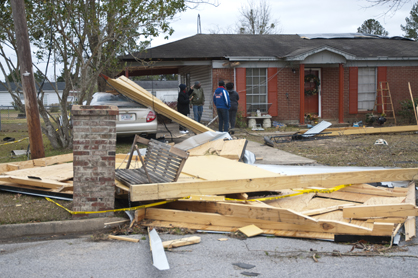 Damages are shown to a local resident's home and car after the twister Christmas Day.

She said she plans to stay at a hotel until some repairs are made to her home.

Gail Dixon became emotional when recounting the storm. Her family lives in a mobile home not far from Howard’s and next to the Nazarene church.

Dixon, along with her husband David and son Davy had just finished enjoyed their Christmas celebration before the storm struck.

Gail said her son had just gotten home from taking his daughters to their mother’s house, when they began to notice how dark it was getting outside.

“I remember it sounded like a train and I just started praying,” she said. “The louder it got, the louder I prayed.”

Tears nearly filled Gail’s eyes as she relived the moments and recalled looking out to see the damage surrounding her trailer.

“It was devastating,” she said. “It’s just a blessing to see what God has brought us through.”