Board appointments and recognizing local officials for their service during the Christmas day tornado were among the actions taken by Demopolis City Council at Thursday’s meeting.

Judy Travis and Jim Grantham were appointed to Bryan W. Whitfield’s hospital board during Thursday’s meeting.

After a 38-minute executive session requested by Mayor Mike Grayson (for good name and character), the council handled the appointments.

Travis was appointed by a 3-2 vote with Cleveland Cole, Charles Jones and Mitchell Congress in favor and Bill Meador and Grayson against. Harris Nelson abstained in the vote.

The Grantham vote brought three abstains including Jones, Nelson and Congress. However, he was appointed with three in favor votes by Grayson, Cole and Meador.

Webb Tutt was up for reappointment, however, Bill Meador’s motion to reappoint Tutt did not move anywhere after failing to receive a second.

He said those nominated to the hospital board will serve a six-year term.

Among other appointments, the council also handled the four open spots on the park and recreation board.

In other business, the council handled nominations for the Demopolis Water and Sewer Board.

Arthur Taylor is up for reappointment. Brian Brooker and Thomas Moore were nominated.

In the start of the meeting, Grayson took time out to recognize the Demopolis Police Department, Demopolis Fire and Rescue Department and Public Works for their service during the Christmas Day tornado. 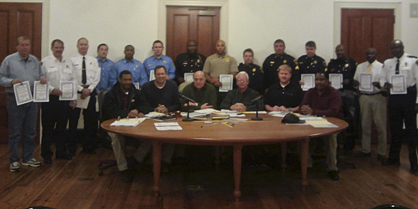 City departments were recognized for their service during the Christmas day tornado.

Among the many that received recognition were Police Chief Tommie Reese, Demopolis Fire Chief Tommy Tate and Mike Baker from Public Works.

“I am very grateful for those officials from the departments that they were willing to give of themselves to come out on Christmas night and serve the citizens of this city,” Grayson said.

“We were just so lucky there were no injuries or fatalities.”