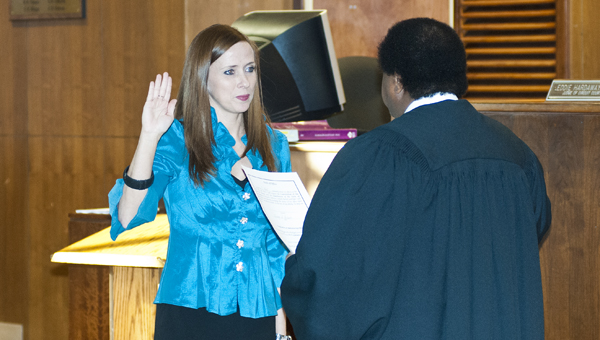 Laurie S. Hall was sworn in as Probate Judge by Circuit Judge Eddie Hardaway on Thursday.

Marengo County Probate Judge Laurie S. Hall and Circuit Clerk Kenny Freeman were sworn in Thursday by Circuit Judge Eddie Hardaway. This marked the second time Hall has been sworn in since being elected in November. The first time was to finish out the term of retiring judge Cindy Neilson.

Hall said she is excited to serve Marengo County for the next six years. “It’s surreal to me to be in this position, but it is still very exciting,” she said. “The last month has been natural, but also a learning experience. The staff has been wonderful. I look forward to the next six years.”

She earned a Bachelor’s Degree in Nursing at Troy State University and attended Thomas Goode Jones School of Law, where she graduated with honors.

Before running for election, Hall was an attorney with Lloyd & Dinning, LLC. Freeman, who was elected as circuit clerk in November, said he is ready to get to work too. “I am very, very excited,” he said. “It’s been a long time coming. [Former circuit clerk] Rusty (Nichols) and the staff have been kind enough to let me shadow them and get going a little bit. I just want to thank Marengo County for putting me here.” Freeman said he hopes to start helping the youth in the area while he is in office. “I love helping people, and I want to get to the youth,” he said. “I want to talk to the schools about how having a record can affect kids in their future as far as getting jobs and being successful.” 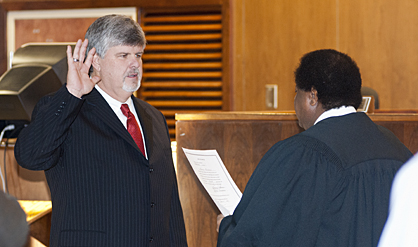 Kenny Freeman was sworn in as Circuit Clerk by Circuit Judge Eddie Hardaway on Thursday.

Freeman, a lifelong resident of Marengo County, has two sons, Jake and Will, and is a member of Gallion Baptist Church.

Before the election, Freeman worked as a partner at West Alabama Real Estate and was employed with Personal Touch.