The Demopolis Tigers hosted the Sumter Central Jaguars on Friday night in an area showdown. This game was the first of two regular season matchups between these teams.

In the final game of the night, the varsity boys of Demopolis gave Sumter Central all they could handle, but came up just short, falling to the Jaguars 64-61.

The Tigers did a better job in the second quarter of attacking the basket, but were still struggling to score the ball. At the half, Demopolis trailed 27-18. 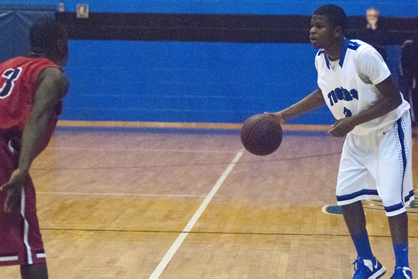 Kiante' Jefferies dribbles the ball up the court against Sumter Central on Friday night.

In the third quarter, Demopolis was able to score the ball a lot better, but Sumter Central still stretched their lead. The Tigers got into a rhythm, though, and it carried them through the end of the game.

Tommy Wilson hit a hot streak in the third quarter, pouring in 12 points, all of which came from behind the 3-point line. Cortez Lewis also played big in the quarter, grabbing rebounds and adding in 6 points of his own.

After the third quarter, the score did not look favorable for the Tigers, as they trailed 51-38.

To start the fourth, Demopolis went on a run to get back into the game. With stifling defense and aggressive offense, the Tigers pulled even with the Jaguars at 54. Demopolis was unable to grab a lead, but they kept the game tight throughout the rest of the quarter.

With 1:06 to play, and Demopolis trailing by 4, Tyler Perkins drained a 3-pointer to bring the Tigers within one at 60-59.

After a couple of poor possessions by the Tigers, they trailed 64-61 with 7.1 seconds on the clock, and Sumter Central had just missed a free throw that would have sealed the game.

Roderick Davis brought the ball down the court with a chance to tie, and missed the 3-point attempt as time expired.

Head coach Rodney Jackson said he thought his team played hard and focused in the fourth quarter, but came up just short.

“We went at them and attacked in the fourth,” he said. “We focused and we had the ball bounce our way a few times. I have to get them to focus like that for four quarters now. Hopefully we can get Selma on Tuesday.”

Wilson led the Tigers with 18 points and Lewis added in 15 of his own. Perkins scored 10, Kiante’ Jefferies added 8, Davis had 6 and D’metric Howell and Demetrius Kemp each had 2.

The loss drops the Tigers to 7-8 on the season.

In the girls game, the Lady Tigers jumped out to an early lead, but late in the second quarter, lost their rhythm and were never able to recover.

Demopolis held a 12-7 lead after the first quarter, and stretched that lead during the second quarter until the Jaguars put pressure on the Lady Tigers and began forcing turnovers. A string of four straight turnovers for Demopolis let the Jaguars back into the game to tie it up at 25 at the half.

The third quarter was an offensive struggle for both teams. Demopolis opened the quarter with five consecutive turnovers, but Sumter Central was only able to create 2 points off of the turnovers.

The Lady Tigers only scored 2 points in the entire third quarter and trailed the Jaguars 32-27 heading into the fourth.

Sumter Central kept up the defensive pressure in the fourth quarter and forced Demopolis into some bad shots and possessions. The Lady Tigers were unable to overcome the deficit and fell to the Jaguars 45-36.

Head coach Tony Pittman said he was disappointed with how his team handled the ball throughout the game.

“I am disappointed in our point guard play tonight,” he said. “Sumter Central played to their strength, which is pressing, and we couldn’t get into a rhythm after that. We weren’t stepping into our shots or knocking them down tonight. We had good post play tonight, but we have to make some adjustments to get ready for Selma on Tuesday.”

Caleb Washington led Demopolis with 11 points, and Ivory Moore added in 9 points. Jonniece Collins contributed with 6 points while Martina Smith and Sha’Deitra White each had 3.

The loss drops Demopolis to 10-2 on the season.

The Tigers will play host to the Selma Saints on Tuesday night.