Tucked away on the third floor of Bryan W. Whitfield Memorial Hospital lies a banner hanging on a patient’s door bearing the words, “It’s a Girl.”

Behind that door lies a baby peacefully resting in her mother’s arms surrounded by an excited big sister and a proud grandmother.

After 39 weeks and five days, baby Brooklyn Serenity Bouler made her appearance in the world as Bryan W. Whitfield’s first baby of 2013. 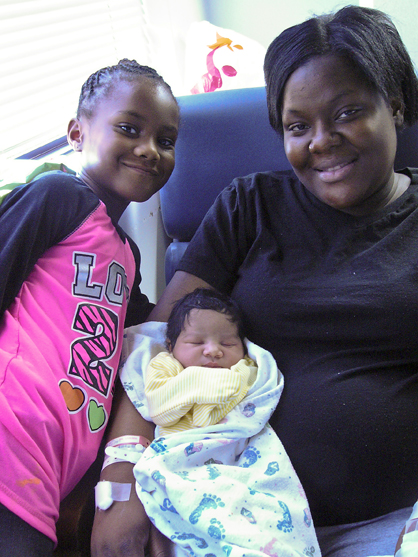 Lolita Bouler is the mother of Bryan W. Whitfield's first baby of 2013, Brooklyn Bouler. She is the little sister of Faith Bouler.

Brooklyn will from now on claim Jan. 3 at 9:06 a.m. as the day she joined the world at a healthy seven pounds and six ounces.

She is the daughter of Keldred and Lolita Bouler and younger sister to one older sister Faith, 6, all residents of Sweet Water.

“It is very exciting for Brooklyn to be the first baby in the area of 2013,” Lolita said.

She is the granddaughter of Voncile Young of Sweet Water and Ella Jean Bouler of Dixon Mills.

Lolita had her labor induced on Jan. 3 and said it seemed as though it wasn’t long before she was able to look at her new baby girl.

Faith wore a big smile as she looked at her mother holding her younger sister. “I am very excited about being a big sister,” Faith said.

Lolita said it may be Saturday or Sunday before she gets to go home with baby Brooklyn.