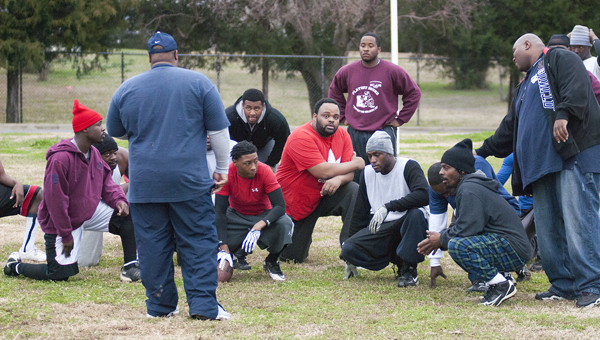 The West Alabama Makos semi-pro football team has been on the practice field for three months in preparation for the upcoming season.

Team founder and head coach Taylor Bates said there are usually between 25 and 40 players that come out to Gaineswood Park in Demopolis for practice every Saturday afternoon.

The Makos, part of the National Developmental Football League, will begin their regular season in March. Although Bates would like to win a lot of games this season, his goals for the team extend beyond the playing field.

“This is a second chance for some of these guys,” he said. “I want this to be a positive influence on the players. I want this to help them believe in themselves, and to help them realize they can get through anything with God on their side.”

Bates is in the process of finalizing his roster for the season, and feels like he has some good athletes on the team.

“We’ve got some good players out here,” he said. “We have some work to do to get ready, but I think we’ll have a good year. The main thing is for this to be a positive experience for all of them.”

Bates said he is looking for sponsors for the team as well.

“I’m not asking for much,” he said. “Just whatever people could help us with, whether it’s t-shirts or helping cover dues. A little bit is better than nothing.”