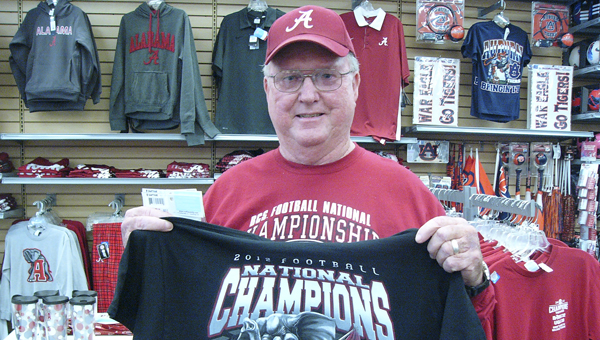 Red Odum is shown with his Alabama National Championship T-shirt. He was among many lined up at the Hibbetts Sports in Demopolis to purchase Championship gear.

A 35-minute drive was not going to stand in the way of Sharron Allen joining the many Alabama fans who lined up Tuesday to purchase the latest National Championship gear.

Allen of Belmont drove to Hibbett Sports in Demopolis on Tuesday afternoon to purchase T-shirts. She was joined by many other eager fans ready to purchase their favorite style shirt.

“I knew I had to come to town, and I am excited about the T-shirts,” she said.

Nick Saban was not the only head coach busy the day after the Crimson Tide added a 15th title to its storied history.

Championship gear didn’t last long at the Demopolis location, Bruno said. It was no sooner than an hour or so after the doors opened at 8 a.m. that she knew she needed to go get more merchandise.

Bruno then traveled to their store in Meridan, Miss. to get more merchandise.

Though the store was out of the highly-demanded “Crystal Dynasty” shirts. She said a UPS order is going out Wednesday morning for them to receive that particular style and youth sizes in the “We Own This” style championship shirt.

“At the first part of the fourth quarter, we headed to Montgomery to get the shirts last night. We got a lot of them fresh off the press,” she said.

Red Odum was another eager fan there to purchase championship gear and said he felt wonderful when Alabama won Monday night’s game.

“I have two son-in-laws. One is an Auburn fan and the other is a LSU fan. They were on my side during the game last night wanting Alabama to win, but today we are back to our love-hate relationship,” he joked.