Some might remember him as the young talent from this summer’s Canebrake production of “Oliver!,” while others might just know him as a bright US Jones student.

However, 40,000 people in attendance at the 2013 Senior Bowl have a shot to get to know young Demopolis singer Jones Colgrove. He has the chance to sing the National Anthem at the Senior Bowl. All he needs is your votes. 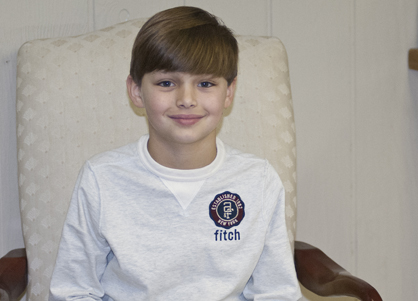 Supporters can vote as many times as they would like during the voting time at www.seniorbowl.com or www.wkrg.com. Last year’s winner received more than 200,000 votes.

Jones learned of the competition through his voice teacher Laura Clements and then registered for a time-slot to go to Mobile and sing.

There were 101 other competitors ranging from all ages and a full audience during his audition. Jones said his biggest worry was to not mess up.

After the initial competition, Jones was then named one of three finalists to vie for a chance to sing at the game, which will be Jan. 26 in Mobile.

Jones is the youngest finalist in the competition’s 10-year history.

“Jones is a huge football fan, and there will be some of the top college players there at the game and to a nine-year old I just know the experience would be one of the greatest ever for him,” Colgrove said.

Candace recalls recognizing her son’s talent at a young age.

“I won’t forget when he was younger how he would climb up on his little stool to brush his teeth and you would see him there, singing and looking in the mirror,” Colgrove said.

As Jones finish school Thursday, he knew a big day lay ahead. He is scheduled to sing on Win 98.5 Friday morning and also sing on CBS Channel 8’s News at Noon segment.

Jones is the son of Edmund and Candace Colgrove of Demopolis. His older sister is Mary-McClain, 12, and younger brother is Josiah, 5. They are members of the First United Methodist Church, where Jones sings in the children’s choir. He also plays the piano and plays several baseball positions with travel baseball and the Demopolis All-Stars.

He is a student in Kristi Stokes, third grade class at US Jones.