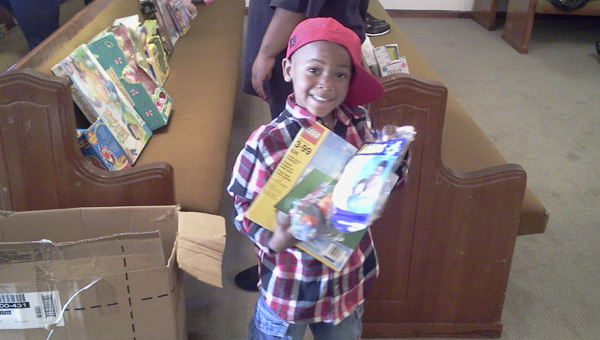 As other young children were making their lists and visiting Santa to wname all the things they wanted for Christmas, young volunteer C.J. Chaney, 5, was helping to make sure others received gifts.

Chaney could be found eagerly working alongside volunteers of the local organization, A Time to Share, to ensure those children who are less fortunate had Christmas gifts.

“It was so great to see him helping. He came and said ‘I want to help,’” minister Grace Clayton-Motley, volunteer with the organization, said.

“It was just so cute to see him put toys in bags that he knew was going to help other kids.”

During the recent holiday season, A Time to Share was able to give out about toys ranging from stuffed animals, games, dolls and a variety of other things to help more than 60 families.

Motley said all the toys were made possible by a benefactor, who wished to remain anonymous. The donation helped families in Marengo, Greene and Perry counties.

The organization began giving out the toys around noon on Dec. 22 and finished on Christmas Eve night.

“We just want to thank all the individuals, businesses, churches and our special Christmas Santa Claus (benefactor),” Motley said.

Motley also said community members have been very supportive as they recently sponsored Thanksgiving baskets, that served more than 200 people in the community.

“We are just thankful we were able to do it,” she said.

Motley’s son, Bradley White of Demopolis, began A Time to Share as a way to give back to the community.

The organization, now in its sixth year, has seen growth since its first Thanksgiving meal back in November 2007.

Originally the organization held events for the Fourth of July and Thanksgiving. Now they have began to hold events for Easter, a back-to-school giveaway and most recently Christmas.

Motley said she and the volunteers liked the opportunity to help people over the Christmas holiday.

She said they saw a variety of people come in to get toys for their children.

“It may have been people who weren’t able to get on DHR’s list or other organizations that help people and they were slipping through the cracks. It was just such a blessing God put it on someone’s heart to donate the toys,” she said.

Parents were able to go to the Hopehill District Building for the toys, which were available for children up to about age 12. Parents could come in, pick up toys and wrap them, if they desired, and take them home for Christmas.

“We even saw a lady that came from Greene County, who was having a hard time. She had small children and at the time, she wasn’t going to have anything for them for Christmas, until she came and picked up some toys,” Motley said.

Motley said the organization is gearing up for a new year and will be taking donations as they prepare for the Easter event in March.

She also spoke of her son, who had the idea to start this organization years ago.

“He loves what the organization stands for and to help these children,” she said. “He has also loved to see people get the help they need.”

Some upcoming events for the organization including the following: Easter event tentatively to be held at Foscue Park, the annual Day of Sharing event to be held on July 6, the Thanksgiving meal held on Nov. 28 and if donations allow, the organization will give out toys again for Christmas.