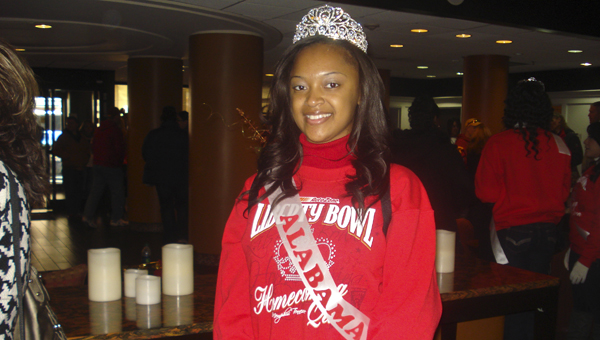 Chelsea Bouler of Vineland was crowned as Marengo High School’s Homecoming Queen for the 2012-2013 school year.

She was selected to represent her school and Alabama at the AutoZone Liberty Bowl Classic in Memphis, Tenn. While there she had the opportunity to network with the other high school Homecoming Queens from Alabama and other states across the country.

She participated in the AutoZone Liberty Bowl pre-game show and halftime show at the game. During her trip to Memphis, she had the opportunity to tour the facilities at St. Jude Children’s Research Hospital and visit with the patients.

Her favorite moment of the weekend was riding the massive float down Beale Street and waving to the thousands of Iowa State and University of Tulsa fans.

Chelsea said this was an astonishing experience, and she wishes that every upcoming queen at Marengo High School will continue to participate and represent Marengo, as well as Alabama in this event.