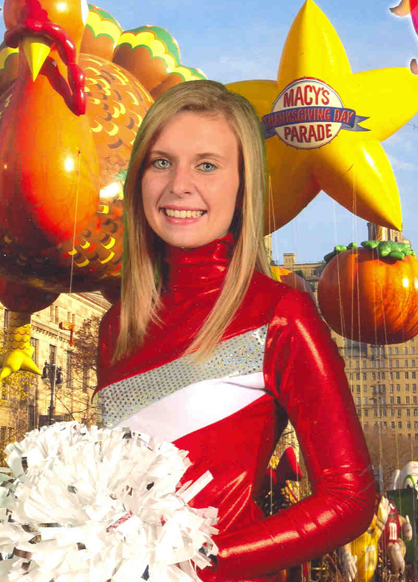 As a part of Spirit of America Productions, this group of cheerleaders from across the nation were busy the entire week not only with daily rehearsals, but also seeing the sights of the Big Apple. While in New York, the cheerleaders attended a Broadway musical, took a Statue of Liberty Harbor Cruise, went to Top of The Rock, the 70th floor of Rockefeller Center, attended the Radio City Music Hall’s Christmas Spectacular featuring the famous Rockettes, went to Times Square, shopped at Macy’s in Herald Square, and rode the NYC subway. Not only did the cheerleaders march in the parade, they were the opening act that performed in front of Macy’s after being announced by Matt Lauer.

After their performance, the girls got on the Subway and rode to Central Park where they entered the line-of-march and brought in Santa Claus as the parade strolled thru Manhattan. Many hours of preparation were spent on this very professional and difficult performance. The girls received a copy of their routine two weeks prior to leaving for New York.

Upon arrival in New York City, there were many intense practices, some lasting as long as seven hours, that were held daily in preparation for the parade. In addition to being a part of the Macy’s Thanksgiving Day Parade, the Spirit of America cheerleader performance team was also featured in two nationally televised performances showcased live on NBC.

The entire week was an opportunity of a lifetime for this high school senior. She was accompanied on this very memorable trip by her parents and brother, Dennis, Cindi and Hutson Breckenridge and her grandparents, Charles and Cheryl Moore.