Tucked away in a small part of Kampala, Uganda are young children that will never forget a special visitor who recently returned back to the states — in fact, to Demopolis.

For Sydney Hasty, 22, her call to missions came as early as her sophomore year at Demopolis High School.

After DHS, Hasty began her collegiate studies at Moody Bible Institute in Chicago until she felt the urge to dive completely into missions by seeking a first-hand experience.

“It was last New Year’s when The Great Commission was really on my heart,” she said. “I just said, ‘I will do anything for you Lord.’”

In Christianity, the Great Commission is the instruction of the resurrected Jesus Christ to his disciples that they spread his teachings to all the nations of the world.

Hasty remembers praying that prayer but never knew her missionary destination would be on a different continent, leaving her 16 hours away from Demopolis and 7,929 miles away from the U.S in Kampala, Uganda.

Sydney discussed in conversation her desire to go abroad with two girls she knew from working with the group, TeamEffort, a summer job she held working with youth camps. From that conversation, she found out there were worship leaders in Kampala that needed some assistance.

“That conversation was the door that swung open for me,” she said.

Sydney now had a destination for her desire to put The Great Commission into action.

The next steps for the young missionary were to discuss leaving with family, put school on pause and raise the funds she needed for travel.

Sydney’s parents were familiar with her call to missions at a young age, so she said her parent’ support when it was time for her to go abroad was such a blessing.

“The message to just “Go” kept coming to me,” she said. “Of course, it was hard for them (her parents), but they were very supportive.” 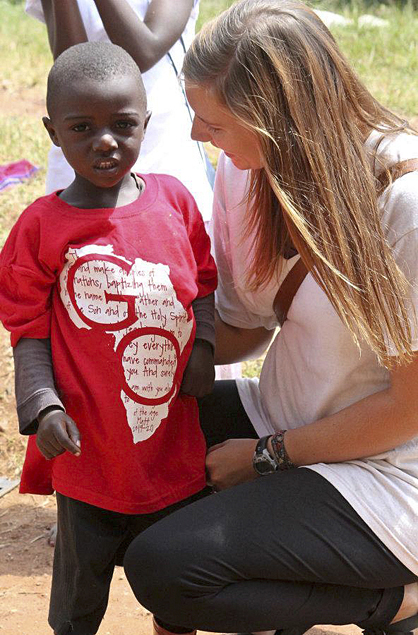 Above DHS graduate Sydney Hasty is shown with a Ugandan resident. He is wearing a “GO” Shirt that Hasty used as a fund-raiser to be able to travel abroad.

In January of 2012, Sydney made the decision to go to Kampala. As a fundraiser, she designed a T-shirt with a sketch of the continent of Africa bearing the words, “GO” across the drawing.

Though Sydney thought people would think her desire to stop school and go abroad would be crazy, she said the community stood behind her in an enormous way.

“Whether it was money to go or an email when I was over there, the community, my family and friends were amazing,” she said.

After raising the money, it was time for Sydney to make her desire to go a reality. She would then board a plane with destination full of changes that lie ahead, which included a new currency, new food, an unfamiliar native tongue and new means of transportation.

Hasty remembers the children in the slums of Uganda and said for those born there poverty is all around them and education is not easily accessible. In Uganda, a mud house with little mobility is the place these children call home, many times shared with five to ten more people.

“When you see the mud huts, it sometimes gets to a point where you can’t communicate the poverty you are seeing. And, falling in love with those kids there, who were experiencing such poverty, I just can’t explain it,” she said.

Her new home was a compound unit, which consisted of one unit for the missionaries and another for ten street boys from the area.

The first three months for Sydney consisted of helping in the home school teaching the children numbers, months of the year and other things. She also coordinated a Vacation Bible School for the children in Kampala, where about 30 children were brought into Christianity. It was hosted by Hasty’s church she visited when studying in Chicago.

“I remember corresponding with my mom, who is a kindergarten teacher and a close friend, Tiela Lee, who is a special education teacher, for advice,” she said.

When asked what her mission trip did for her faith, Hasty could do nothing but smile and say, “A lot.”

She said the experience grew her into a stronger woman of faith.

“It was horrible to say goodbye, on one hand it was ok because I missed my friends and family back home, but after being there, those people had become my friends and family. Which kinda sucks, because now no matter where I am, I’m missing somebody,” she said with a smile.

Hasty will not only take away her experience teaching at the school, there is one picture of her with a young Ugandan boy that she will always treasure.

“On the last day, my little buddy Malik, one of the boys at the school just laid one on me,” she smiled talking about the kiss Malik gave her as they were saying goodbye. “Those kids are my heart, they completely stole my heart.”

Hasty spent from March until December of 2012 in Kampala and arrived back in Demopolis in time for Christmas.

“I am just so thankful for the opportunity. I think the Lord pulled me away at the right time. I learned in praying and if you take that step of faith, He will be faithful and he truly does work all things together for those who love him,” she said.