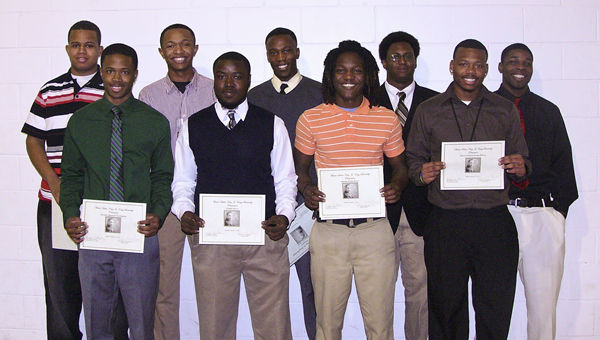 A group of high school males applied for the King Unity Scholarships, which are given out annually. Shown are some of the applicants on the front row, from left is Marquis Washington (SWHS), Arthur Allen (JEHS), Shauka Reese (LHS) and Anthony Perkins (JEHS). On the back row, from left is Kentravon Grayson (MHS), Jason LeDarius Kemp-Kirksey (LHS), Demarcus Woods (ALJ), Dequinton Bell (LHS) and Antonio Dunner (ALJ).

As president Barack Obama was sworn-in for a second term in the nation’s capital, young male students in Marengo County were awarded scholarships to attend college. The festivities fittingly took place on the day set aside to honor Dr. Martin Luther King Jr.’s legacy.

“We started the scholarship program because we wanted to have a positive program in honor of Dr. Martin Luther King Jr. on his day,” Annie Robertson, founder and general chair of the King Unity Scholarship said.

Robertson also acknowledged her late friend, Geneva Howard, who had the suggestion to use the program as a way to honor male students.

The scholarship committee awarded three $500 scholarships and one additional $200 prize to a student, who submitted their essay on or before the “early bird date.”

There were 12 male applicants and Robertson said it is the scholarship committees’ hopes that with continued fundraising the other applicants will be able to receive book scholarships.

Those students who applied submitted an essay. In addition to applying, students will continue to update the Scholarship Team Leader William Martin when they enroll in college.

Since the inception of the idea seven years ago, the scholarship program has already seen college graduates, who have benefitted from their fundraising.

Several participants made up Monday’s program including historical reflections from Gus Weiss, III, a solo by A.J. Nixon and a mime presentation by the St. Paul Mimes.

Door prizes were also given out to those young people answering questions related to black history.

Tales of the Freedom Riders and Emmitt Till filled the room, as Weiss told stories of those pivotal moments in history.

“We can never forget what has happened prior to us having the freedoms and liberties we have today,” he said.

Three young men, a part of St. Paul’s Mime group, performed to the selection, “I Won’t Complain.” The Mimes painted their faces white and moved robotically to interpret the words in the song.

The celebration and observance of Dr. King’s contribution to society continued with a program at Rockbabylon Baptist Church in Dixons Mills.

The guest speaker for the occasion was the Rev. Fred Moore, pastor of Christian Chapel Baptist Church in Demopolis. 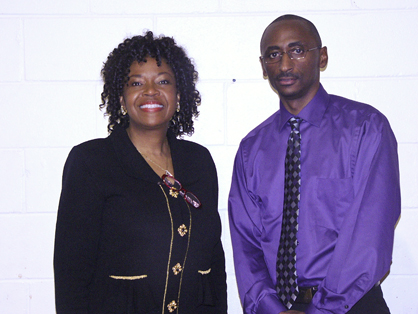 The Scholarship Program team works to fundraise and promote the works of the program. Shown are some of the members of the team including Annie Robertson, founder and William Martin, scholarship team leader.