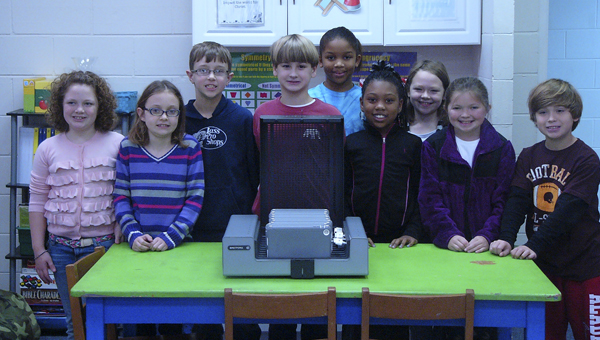 Kim McCrory, fourth grade teacher at West Alabama Christian School, will be among one of the teachers using new Ipad minis in her class. The school received a donation to purchase various items to enhance technology in their classroom experience. Shown in the photo are students of McCrory's class, from left is Emily Hall, Emily Foxhall, Caleb Gray, Blair Gibbs, Robreauna Fluker, Kendaisha Brown, Tiffany McInnis, Taylor Weeks and Caleb Parten.

A local Demopolis family have made a substantial donation to the West Alabama Christian School located near Fairhaven Baptist in efforts to enhance technology in the classrooms.

Though the students and teachers may not know the family, their classroom lives will forever be changed with the addition of iPads, a mobile teaching unit and different teaching apps purchased as a result of the donation. The mobile teaching unit consists of a television with the capabilities to display instruction to the entire class via the iPad.

The sign will bear the church name and the school name, which they hope to purchase soon.

“It was given by a family that believes in the mission of this school, they just said that God blessed them so they wanted to bless this school,” she said.

The donation will help to purchase 13 iPad Minis. The largest class at the school has about 12 students and the additional computer will be used for the instructor, she said.

In addition, they purchased Otterbox cases for the computers, a 37-inch television that will serve as a mobile classroom, docking stations for the iPads and they will use about $500 for apps.

She said prior to this, the classrooms all had one computer, so this will broaden their possibilities with every student being able to have an iPad.

“It’s really unlimited what we could do now,” she said.

She said it brings the school to a level playing field with other schools in the area to have increased technology.

The computers will be kept in the docking station and teachers will have to work together in scheduling use of the computers and the teaching station.

There are seven teachers in the school. Currently, the school goes to the seventh grade, but Long said next year they will be adding eighth grade.