Nathan Evan Hay from Troop 41 of the Black Warrior Council has obtained the Boy Scouts of America’s highest rank of Eagle Scout.

Hay began his scouting career as a tiger, earning every cub rank including Arrow of Light before crossing over to boy scouts. As a scout, he attended the 2010 National Jamboree and completed the high adventure camps of Philmont and Sea Base. 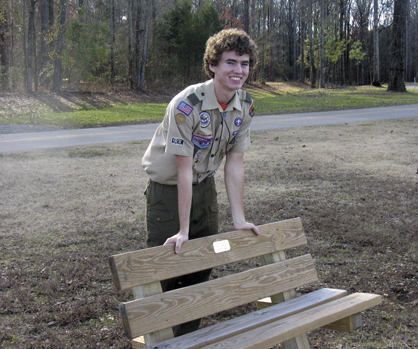 Nathan Hay earned the rank of Eagle Scout, and designed and constructed benches to put in Spillway Park.

He is a member for Aracoma Lodge 481. Nathan’s eagle scout project consisted of designing, constructing and installing benches for the newly renovated Spillway Park at Foscue. The project was completed for the U.S. Army Corps of Engineers.

He is the son of Larry and Cindy Hay. He is a senior at Demopolis High School. His Eagle Court of Honor will be Sunday, Feb. 10 at Fairhaven Baptist Church.