Scale Back Alabama is now officially in full swing after the first weekly meeting for the program was held Tuesday at Bryan W. Whitfield Memorial Hospital.

Participants in the program have committed to a 10-week program designed to promote weigh-loss among teams and encourage a healthy lifestyle change.

“I hope they (participants) learn the tools they need to make it a lifestyle change,” Betsy Adams, Wellness Center director said. 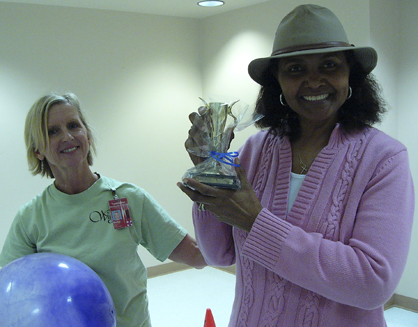 Grace Brown of the Slim Janes took home the trophy as winner of this week’s game for Scale Back Alabama. She is shown with Betsy Adams of the Wellness Center.

There are 14 public teams and 14 hospital teams. Adams said there is a trophy that will passed around at the meeting to the team with the highest weight loss.

The goal for many of the participants is to one pound a week resulting in a ten pound loss over the 10-week timeframe.

Hospital teams also dove into Scale Back with their creative team names including Muffin Top Stoppers, In it to Win it and Weapons of Mass Reduction.

The meetings will cover various weight-loss topics such as realistic weight loss goals, eating habits, exercise and other things.

This week Grace Brown of the Slim Janes team won the trophy for her team after winning the interactive game. Next week’s meeting will be in the hospital classroom at 6 p.m.