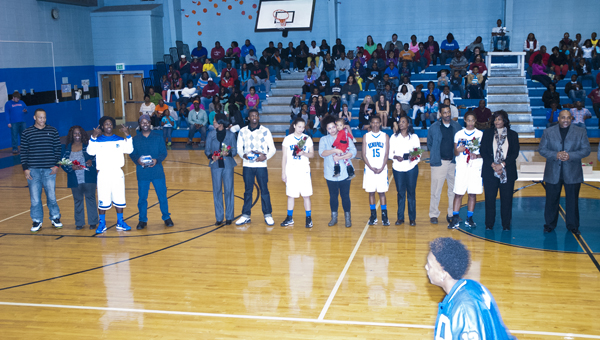 Tommy Wilson led the Demopolis Tigers on Senior Night with 12 points in a win over the Bibb County Choctaws, 49-41.

Demopolis led for most of the game and frustrated Bibb County’s taller players all night.

In the Tigers’ first game of the season, they lost to the Choctaws in overtime, so this game meant a lot to the team.

“I don’t know if it was as much of a revenge factor, or that they wanted to win for Tommy on Senior Night,” head coach Rodney Jackson said. “You only get one Senior Night and I know they wanted this one.”

Wilson was the only senior still on the team. Kevin Isaac started the year with the Tigers but is no longer with the team. He was recognized during the Senior Night ceremony, though.

Cortez Lewis was the only other Tiger to finish in double figures Thursday night with 11 points. D’metric Howell finished with 9, and Rashad Lynch, Demetrius Kemp and Tyler Perkins all finished with 5 points.

The Tigers play their final regular season game of the year Friday night on the road against the Linden Patriots (19-1).

“That’s a rivalry game,” Jackson said. “We want to finish the season against a team like that.”

With the win over Bibb County, the Tigers are 13-11 on the season.

In the girls’ game, the Lady Tigers jumped all over Bibb County and won 42-21.

Demopolis only led by two after the first quarter, but led by 11 at halftime. The Lady Tigers continued to stretch the lead in the second half to come away with the win.

Martina Smith, Jonniece Collins and Alexis Jones were the seniors for the Lady Tigers. Smith finished the game with 6 points, Jones with 2, and Collins was held scoreless.

Ivory Moore led the Lady Tigers for the game with 12 points.